Irish priest praised in US police letter to the Vatican 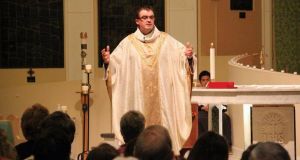 Fr John Gallagher (48), who is from Strabane, Co Tyrone, has been ministering in Florida since 2000.

An Irish Catholic priest has been singled out for praise in a letter sent to the Vatican by US police officers who investigated a clerical child abuse case, while criticising the diocese in which the priest served.

Last week, Fr John Gallagher (48), from Strabane, Co Tyrone, who has been ministering in Florida since 2000, claimed he has been ostracised by church authorities there for reporting the conduct of another priest in January 2015.

He said he was subsequently demoted.

On April 30th, Fr Gallagher said he was told by Palm Beach diocesan authorities that he was being transferred to another parish. The transfer was not negotiable.

The accused Franciscan priest, Fr Jose Palimattom, was arrested and charged with possession of pornography and distributing it to a minor.

He pleaded guilty in court, served a sentence, and has been deported to his native India.

In an unsolicited letter about the case last May to her superior, detective Debi Phillips of the Palm Beach County Sheriff’s Office praised the Irish priest.

“Having dealt with the Catholic Church in another criminal investigation I fully expected church administrators to be unco-operative and dismissive of the allegations,” she wrote. “Much to my surprise I was wrong.”

Fr Gallagher and his staff provided “timely evidence” that led to conviction of Fr Palimattom.

“I truly believe that if it wasn’t for the co-operation I received from [him], other children would have been victimised,” the detective wrote.

Fr Gallagher had acted immediately and taken “steps to hold the individual responsible and deter any further crime that might have been perpetrated against other children in the congregation”.

During his 44-year policing career, Mr Gauger said other church figures had not been as forthright in providing information to investigators and “actually impeded our investigation by their lack of co-operation”.

“Due to Fr Gallagher’s co-operation, the case was quickly resolved and the opportunity for additional crimes was diminished,” the police commander told the cardinal.

However, the diocese of Palm Beach has accused Fr Gallagher of “blatantly lying” about the case and being “in need of professional assistance as well as our prayers and mercy”.

In a statement read at all Masses last Sunday, Bishop Gerald Barbarito said the diocese had “in no way, as Fr Gallagher erroneously asserts, tried to ‘cover up’ the inappropriate behaviour of a visiting priest”.

The diocese had “not only immediately reported the incident to the police and state attorney, but co-operated as fully as we could in the investigation”.

Fr Gallagher’s claim to have been demoted was “but another one of his fabrications,” Bishop Barbarito said.

Fr Gallagher has initiated canon law proceedings against the bishop at the Vatican’s newly formed tribunal of accountability for bishops in abuse cases.

The tribunal was set up last year by the Vatican’s new Commission for the Protection of Minors, which begins an unrelated meeting in Rome today.

Fr Gallagher has also written to and spoken about the case with Cardinal O’Malley, who is chair of the Commission for the Protection of Minors.

Fr Gallagher served with the cardinal when he was bishop of Palm Beach before his appointment to Boston in 2004.

In a subsequent letter to Cardinal O’Malley, also seen by The Irish Times, Fr Gallagher claimed he was “being silenced and hidden, for my actions taken to ensure the safety of my parish and diocese”.

He said “Bishop Barbarito never responded to the situation although the diocese was immediately informed.

“I was told by the chancellor that the bishop was on retreat and had been apprised of the situation.

“When the bishop called, six days after the episode, he thanked me for taking care of the situation.

“When I tried to bring him ‘up to speed’ with the situation, his reply was ‘No John. I want no details’; however; he did state that I did an exemplary job.”

Put on a plane

Fr Gallagher said that, at the time, “all my directions were coming from the chancellor under the assumed direction of the bishop.

“In the presence of a witness while on the phone, the witness overheard her [the chancellor] telling me the following: ‘We need to make him [Fr Palimatton] go away, put on a plane.’

“Onward in the conversation I mentioned to her that I have a timeline. I was told we didn’t need it. It was suggested not to have too many notes.

“Finally when I made it known that it was all caught on camera, it was implied I should not make this known to the authorities.”

He said that when he asked whether he was being told to obstruct a criminal investigation, “there was silence and then I was told just hang on to it!”