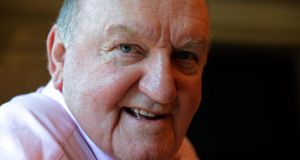 The immediate cause was his knee. The main reason, however, was an outspoken atheist.

“Richard Dawkins drove me back to Christianity. His vehemence. He can believe what he likes. I don’t attack Richard Dawkins. I don’t say all these atheists are fucking eejits, but that’s what Dawkins says about Christians.”

George also had “difficulty coming to terms with the kind of Dawkins version of life which I think actually is nihilistic almost.

“I just started coming to the conclusion that, okay it mightn’t be a man in a white beard in a fiery chariot. It mightn’t be three gods in one, it mightn’t be all this kind of stuff, but I started to believe there’s got to be something else.”

He recalled Br James from his days at the Presentation Brothers in Cork. “You eventually come to the point where science hasn’t got an answer. James said at that point they’re stuck. They can’t explain, and that resonated with me and stayed with me all my life. And then it came back to me a year ago.”

George had to have an operation on his knee. “I had this incredible premonition that I wasn’t going to come out of the anaesthetic.”

He didn’t tell anyone. The extended family got together over Christmas in 2014, and New Year “and I was looking at my kids and saying ‘this is the last time, you know’ . . . genuinely”.

He arrived at the Blackrock Clinic. “The night before (the operation) I call for a priest and your man was great as invariably these fellas are. And Fr Gerry (Byrne) comes in and I said to him ‘bless me father for I have sinned. I have no idea when I was last at confession’.”

The priest said “don’t worry about that. Then I said, ‘I’ve a lot to confess but I can’t remember the half of them and a lot of them revolve around the sixth commandment (relating to sex)’.

So, anyway, he said “the main thing is you’re sorry for all that” and he asked him to say an Act of Contrition.

“Now I haven’t said the Act of Contrition since I don’t know when and it all came back, verbatim. It was a tour de force. Then three Hail Marys, the standard three Hail Marys and I felt – if you’ll pardon the Anglo Saxon expletive – fucking great. I really did. I felt ‘I’m back’. It was like rejoining the club and I felt fantastic. I felt really comfortable about the following morning. I felt, great. I’m ready. I’m okay with it.”

He was doubly blessed. “Believe it or not the Church of Ireland vicar pops in. So Gillian (Wharton) comes in . . . . ‘how are you’? Then I’m really in business because I’ve now got two insurance policies. Gillian says a prayer with me. So now I’m really squared away, okay.”

He felt that “when you look at people like Fr Gerry and Gillian Wharton it’s extraordinary what they are doing for people, whether people have funerals, death, or fear like me. These are good people.

“So, open up the laptop and I watch about 13 or 14 episodes of Breaking Bad. Everybody had been telling me about it. And this little Filipino night nurse kept sticking his head inside the door, ‘are you okay’? ‘I’m fine, don’t worry about it.’

“Anyhow, I go down, get the knee done and I wake up and I’m delighted to wake up. There’s a nurse there and everything and I’m thrilled with myself.”

“My life has changed . . . like I don’t go to Communion every week, or go to Mass every week or I don’t do the trappings of it. But I have, truthfully, I’ve looked at life through a Christian lens.

“I’ve become like a reformed alcoholic now. I have this absolute abhorrence of lying, for myself and for others. I’ve become more generous of spirit I think. It’s actually absolutely true. I’m a better person.”

“I think what I will become increasingly is a defender. When I think of my mother’s final days, because I was such a shite son, it was a nun who was looking after her, a nun who had devoted her entire life to helping other people. They’ve got an awful rap If you want to understand me you should have met my mother. I’m very like her.”

He was in the US when she was dying. She was in a coma. He flew back. “When I went in she said, ‘hello son’. I asked how she was. She said, ‘I’m not feeling too good’. She never spoke again.”

He wishes she had lived longer, to see his success. She would have revelled in it. “She’d have had the neighbours annoyed.”

An only child, he also “adored” his father.” A clerk with CIE, he handed over his wages to his wife and played in a band at evenings “to pay for my fees” at the Presentation Brothers. “He’d talked to me like an adult.”

“Everybody is convinced that Christianity is dead. Well they’ve been saying that now for the best part of 2,000 years. I think there’ll be a change. I think the story is too good. Love thy neighbour as thyself. Who’s got a problem with that?”