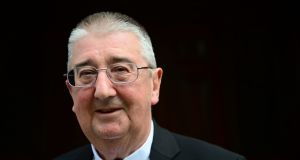 Archbishop of Dublin Diarmuid Martin: “We owe a great deal to those who bear the responsibility of leadership at this moment, especially in the front line.” Photograph: Dara Mac Dónaill

The coronavirus outbreak has led to almost half of Dublin’s Catholic priests being confined to their homes as they are aged over 70, Archbishop Diarmuid Martin has said.

The most recent figures showed that 413 priests and 22 deacons were serving in Dublin. Dr Martin said about 200 of these were in isolation following the Government’s direction that people aged 70 and over stay indoors to limit their risk of infection – a process called cocooning.

The archbishop said this scenario was “placing a great strain on those who remain active in ministry” and that priests were not immune to “the fears and anxieties” many are feeling at the moment and “deserve our support”.

The 74-year-old said he was among the clerics cocooning as a result of the pandemic. “For me, as someone who is active by nature, it is inconvenient. It is, however, nothing compared with the hardship experienced by so many others in the current situation.”

Archbishop Martin said he had been phoning people to see how they were getting on. “The remarkable thing is that so many of them reply that they are all right because neighbours and friends have been helpful and keep in touch.”

He said being a good neighbour was “a trademark of Irish families and it is moving to see how they are responding” to the situation.

He said “young people have been great” during the crisis and. “We owe a great deal to those who bear the responsibility of leadership at this moment, especially in the front line,” he added.

Archbishop Martin said he had been “trying to reach out to parishes” and that “online communication is a great blessing”.

He said, as is the situation for many clerics, this was the first Holy Week “in my entire ministry that I have to participate from home”.

“I share in the sadness not just of priests but of most Catholics who experience the same void in their spirituality.”