HSE says it plans to double the number of Covid-19 tests carried out each day to 4,500

According to HSE chief executive Paul Reid, the ability of the health service to test for coronavirus will be doubled from next week to around 4,500 per day. Video: RTE News Now 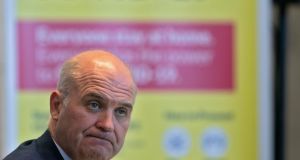 Chief medical officer Dr Tony Holohan said on Sunday that the past week had seen the nation ‘working hard, together, by staying at home to flatten the curve’ of coronavirus cases. Photograph: Colin Keegan/Collins.

A further 21 people have died of the coronavirus in Ireland and 390 new cases have been confirmed, the National Public Health Emergency Team has said.

A total of 158 people have died in the State after contracting Covid-19, figures released on Sunday evening state, and a total of 4,994 cases have been diagnosed since the pandemic began.

The number of people in intensive care units (ICU) being treated for the virus stood at 165 on Friday, up from the 158 on Thursday. A total of 1,203 cases (27 per cent of the total) have needed hospital treatment to date.

Of the 21 latest deaths, 17 were in the east of the State with two each in the south and west. Twelve men died and nine women, the Department of Health said, with a median age of 81 years.

The department’s chief medical officer Dr Tony Holohan said the past week had seen the nation “working hard, together, by staying at home to flatten the curve”.

“If you develop symptoms of Covid-19 you need to self-isolate and phone your GP. I ask that everyone inform themselves on what to do in the instance they develop symptoms, as well as how to maintain their health and wellbeing,” he said.

A more detailed breakdown of the figures shows that, as of Friday, there had been 236 clusters detected which were responsible for 903 coronavirus cases.

The median age of those infected was 48 and 53 per cent were female with 47 per cent male.

Some 26 per cent of those infected were healthcare workers ( 1,163 cases). Some 56 per cent of total cases were in Dublin with 8 per cent in Cork.

Earlier, HSE chief executive Paul Reid said the ability of the health service to test for coronavirus will be doubled from next week to around 4,500 per day.

From then, testing capacity in laboratories in the State will increase to 4,500 a day, compared to a current capacity of 2,000 to 2,500 tests a day, depending on the availability of testing reagent, he said on Sunday.

Mr Reid would not be drawn on reports that the restrictions in place to curb the spread of coronavirus, which have seen all education facilities and most work places and shops shut and people required to stay at home, could be extended beyond next weekend.

This decision was for medical and public health experts to make, he said. Mr Reid also stressed the importance of people abiding by the current restrictions, adding that public actions to date have “saved life”.

Due to shortages in laboratory materials and kits, this throughput fell to 1,500 tests a day last week and a number of testing facilities around the country were forced to close.

Mr Reid said a German supplier had come on board last Friday and was now in a position to perform 2,000 tests a day. He said it was still the HSE’s aim to 15,000 people daily by the end of April.

Testing is now being performed by the National Virus Reference Laboratory in UCD and at laboratories in 18 different hospitals.

Further testing capacity would come on board next week, including the State laboratory at Backweston.

However, Mr Reid cautioned that the supply of reagents needed for the testing process remained a challenge. The HSE was “still looking at other EU solutions as we continue to source the reagent supply”.

He said this was a “very significant worldwide challenge” with competition to secure a supply.

The HSE said it had 109 critical care beds available. Its chief operations officer Anne O’Connor said there were plans in place to accommodate seriously ill patients when the anticipated surge in Covid-19 cases comes.

“Critical care is a whole system of care, the bed has to be there, it needs a ventilator, we need oxygen for the patient. At this stage we will have up to 800 staffed and ventilated beds.” The HSE is also working with the private hospitals over the provision of an additional 200 critical care beds which would take the total to 1,000.

To add to the 1,100 ventilators in public and private hospitals, 25 new ventilators have been sent to the Mater and St James’s hospitals, and a further 225 are scheduled to arrive next week, he said.

A major challenge, he said, was redeploying staff and training up some further staff, a process that was ongoing, he said. “Over 800, primarily front line workers had been recruited,” and these were now being retrained, redeployed and being used in scaling up capacity, he said.

The HSE also said on Sunday work was ongoing on the development of a contact tracing app which would help track people who have come into contact with someone confirmed as having Covid-19.

Some 37,000 tests for Covid-19 have been completed and their results returned, according to Ms O’Connor.