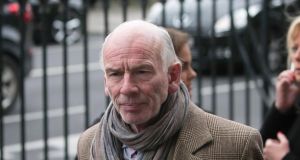 Actor John Kavanagh at the funeral of Susan Fitzgerald at the Church of The Three Patrons, Rathgar, Dublin, Dublin. Photograph: Gareth Chaney/Collins

The actor Susan Fitzgerald, who died last Monday, had no fear of dying and had sympathised with the doctor who had to tell her she had little time left, her funeral service in Dublin was told today.

Fr Leonard Moloney told a crowded Church of the Three Patrons in Rathgar, Dublin, that she contacted him last June and said she would like him to “celebrate my funeral”.

He recalled her “reflecting on the fact that she was dying, reflecting acceptance”. She was “an extraordinary” person.

In a tribute to his former wife, Gate Theatre director Michael Colgan spoke of the “grace, elegance and style,” with which she had addressed her cancer. Staff who looked after her had said it was a privilege to know her. When the consultant told her she had little time left, she responded: “You poor thing, having to give me that bad news.”

Sarah Colgan said their mother “taught all three of us what it is to love unconditionally”. She had given them “the gift of great confidence”, but when they found out in May 2011 she had cancer, their world was crushed. Yet there was “never any anger or hint of self pity” on their mother’s part.

Richard Colgan said his mother “taught us to see the world through empathetic eyes”. The overwhelming support the family had received since her death was her legacy to the family.

1 Man found guilty of murdering girlfriend during drinking session
2 The real Contagion virus is out there and it’s causing virologists to worry
3 Cork shootings: Father and sons to be buried in two separate funerals
4 Majority of Irish Covid-19 cases come from variant that originated in Spain – study
5 Postmortem results on mother and two children found dead in Dublin due on Friday
Real news has value SUBSCRIBE