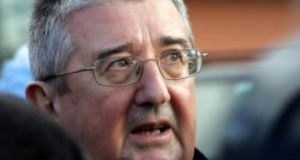 Archbishop of Dublin Diarmuid Martin said some bishops at the synod felt the document could have said more on the questions of LGBT people and divorce. File photograph: Eric Luke/The Irish Times

It will not be possible for the Catholic Church to use certain language concerning LGBT and divorced people following last weekend’s Synod, Archbishop of Dublin Diarmuid Martin has said.

The last session of the Vatican Synod on the Family saw bishops disagree on the pastoral approach to gays and to the divorced and remarried.

It wrapped up with a final document which appeared to backtrack on an earlier document that spoke of “welcoming” gay people into the church family.

However, Dr Martin said Pope Francis wants to look at the reality of people’s lives and the struggles they face.

The Pople recognises “that most of us live in the grey areas of life. Nothing is black and white,” Dr Martin told RTÉ radio this morning.

He said the Synod would mark a more liberal shift in the language of the church. “Some of the language used by the church should not be used again. I really feel that after the discussion of the Synod it will not be possible to do that.”

Saturday’s final Synod document stated there could be no comparison between “God’s design” for men and women and the concept of same sex marriage. The document also said attempts to change the ban on the divorced and remarried receiving communion “needs to be further considered”.

Dr Martin said some bishops at the Synod felt it would have been counter-productive to vote no to the document. The bishops “could have voted no because they felt they weren’t saying enough but even that could have given more negative,” he said.