Death of Irishman with long career in Vatican diplomatic corps 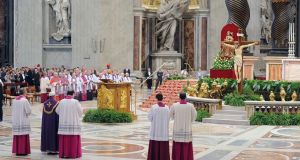 Mass at St Peter’s Basilica in the Vatican. Photograph: EPA

The death has taken place of Archbishop Thomas White (85), a priest of Ossory diocese who had one of the most varied careers an Irishman has had with the Vatican diplomatic corps. It included service as papal nuncio to Rwanda, Ethiopia and New Zealand.

From near Cullohill, Co Laois, Archbishop White attended St Kieran’s College, Kilkenny, and was ordained in 1956.

From 1960 he served in the Vatican’s delegation to Eastern Africa, covering territory from Kuwait to the Zambezi, headquartered in Nairobi, Kenya.

Much of his time there over five years was taken up with preparing for decolonisation in Kenya, Uganda, Tanzania, Zambia, Malawi and the Seychelles, and the establishment of nunciatures in each country.

In 1965, he was transferred to Guatemala where the head of mission was also nuncio in El Salvador. In 1967 as Msgr White he moved to Colombia and in 1970 he was posted to Switzerland where also acted as Holy See observer at the UN and other international agencies in Geneva.

In 1974 he was appointed Chargé d’Affaires at the nunciature for China where he ministered to the the underground Catholic Church there from Taiwan, Hong Kong and Macau.

Ordained Archbishop in 1977 he was appointed papal nuncio to Rwanda, transferring to Ethiopia in 1983 where he spent six years helping to deal with three major famines.

In 1989 he was appointed papal nuncio to New Zealand which also covered all of Oceania including Tonga, Nauru, the Marshall Islands, the Federated States of Micronesia, Western Samoa, Vanuatu and Kiribati. He was succeeded there in 1995 by Archbishop Patrick Coveney, uncle of Minister Simon Coveney, who had also succeeded Archbishop White in Ethiopia.

Archbishop White, who retired in 1996 while still continuing to do some diplomatic work for the Vatican, died on Sunday at Gowran Abbey nursing home in Kilkenny.