Controversial priest to ‘recharge the batteries’ 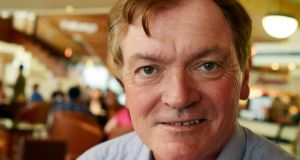 Fr Iggy O Donovan: “What I most detest in ecclesiastical life are those career-orientated clerics who denounce colleagues.” Photograph: Cyril Byrne

Augustinian priest Fr Iggy O’Donovan is taking time out. His term as prior in Drogheda has just come to an end and he had already told his superiors he was available to take whatever posting was on offer, including a sabbatical.

He has been offered the sabbatical, based in Limerick.

Fr O’Donovan told The Irish Times yesterday that he acknowledged that controversies in which he was involved “have taken their toll”. Besides, “the church itself has been through hell and back” so he felt “it might be a good time to recharge the batteries.”

Then “out of the blue comes Pope Francis. I’m hoping we may have a John XXIII on our hands. He strikes me as a particularly good man. John came out of nowhere and became the greatest pope since Gregory the Great [died 604].”

Drogheda had been “an immensely rewarding experience” and he had made “genuine friends” there.

Yes, the controversies had been “debilitating”, but his relationship with church authorities on a personal level remained good.

He has “a very good relationship” with his Augustinian colleagues and has “always gotten on well with church authorities” in Armagh archdiocese, where Drogheda is located. His relationship with its cardinal archbishops had been “always amicable”.

He now feels his concelebration of the 2006 Easter Sunday Mass with Church of Ireland rector of Drogheda the Rev Michael Graham, which caused a huge row, was a misjudgment on his part.

“I regret the fall-out from it. I have to admit I misjudged. I miscalculated the consequences for all involved and the genuine hurt it caused. There was a certain naivete on my part in thinking one could do that. Had I consulted more widely it would probably never have happened.”