Analysis: amoral institutions protected before the welfare of children 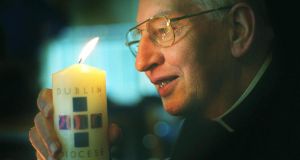 You could say that chapter 20 is a 62-page distillation of all the horrors revealed in the Murphy report, in general.

It illustrates vividly a world which had lost its moral compass but not least where the welfare of children was concerned.

The appalling carelessness of three Catholic archbishops and their senior church colleagues when it came to children is equalled only by the pathetic obsequiousness of some senior gardaí determined, seemingly, to remain “in” with their would-be clerical betters. That mindset of another day.

Not of a distant time
However this was not in some distant time when illiteracy and poverty ruled the majority on our island. We are talking of a quarter of a century ago.

It was in 1988 that Dublin’s Catholic bishops, and Archbishop-elect Desmond Connell, decided to unleash a known paedophile on an innocent California.

As chapter 20 puts it: “The bishops decided to let him [Patrick McCabe] go to the USA. They, in effect, set him loose on the unsuspecting population of Stockton, California. There is no record that they notified the bishop of Stockton of his arrival.”

Indeed, when the diocese of Sacramento there discovered that McCabe was back in their bailiwick once again, it never occurred to them that this was with Dublin’s full knowledge and full consent.

In their naivete they “assumed, wrongly of course, that the Dublin archdiocese might not have been aware of his presence in Stockton”, as chapter 20 put it.

They decided to help by informing Stockton of the child predator in their midst.

Extraordinary protection
As for Archbishop Dermot Ryan, chapter 20 says he “protected Fr McCabe to an extraordinary extent; he ensured, as far as he could, that very few people knew about his activities; it seems that the welfare of children simply did not play any part in his decisions.”

Then, when McCabe returned to Ireland in 1986, on Archbishop McNamara’s watch, he wandered unhindered where he would abuse and, inevitably did abuse again.

Missing files
Then there are the gardaí, who had no record of McCabe’s interview following that 1986 incident and whose files on it went “missing”.

There’s the Garda sergeant friend who accompanied McCabe to the station on that occasion and the truly extraordinary Chief Supt Joe McGovern, in one of whose houses McCabe was staying at the time and to whom McCabe made “certain admissions.”

These the chief super decided were for the parish priest’s ears only.

Serial paedophile
There is all that subsequent “shocking . . . connivance”, as chapter 20 puts it and explains which meant, simply, that a serial paedophile was allowed to evade justice because he was a priest.

Were this fiction, with its hint of Gubu and stereotypes, it would be laughed at. It is not.

It is our recent disgusting history where the welfare of amoral institutions was put before the innocence of children.