Catholic group calls for commission on celibacy and female deacons 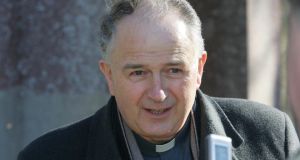 The Bishop of Kilmore Leo O’Reilly requested that his fellow bishops set up a commission to look at the ordination of married men and female deacons. Photograph: Brenda Fitzsimons/The Irish Times

The Association of Catholics in Ireland (ACI), a lay reform group within the church, has warmly welcomed a call by Bishop of Kilmore Leo O’Reilly requesting that his fellow bishops set up a commission to look at the ordination of married men and female deacons.

In seeking such a commission “Bishop O’Reilly is reacting positively to the urging of Pope Francis who, speaking about the shortage of priests, said that local bishops are best acquainted with the needs of the faithful and should be courageous and bring concrete suggestions for reform to Rome,” it said.

Bishop O’Reilly’s proposals reflected elements of its own submission to Pope Francis for consideration at the Synod on the Family to be held in Rome next month, it said.

“The growing shortage of priests needs to be addressed now as a matter of urgency to ensure access by the faithful to Eucharist in the years ahead,” it said.

It added that such a move “would be in keeping with the practice of the Eastern Rite church where clerics can be married and eliminates the current anomaly whereby in England married Anglican clergy have been accepted into the Catholic Church as ordained priests.”

It has also argued that “there is a cohort of ordained priests who left active ministry to marry without seeking laicisation and who could be invited back into ministry right now.”

The high percentage of priests over 65 years of age in Ireland and the low intake of seminarians “suggest that in 10 years time many parishes will be without a resident priest,” it said.

“Already the clustering of parishes has resulted in some parishes being without a daily Mass and on selected weekdays only having prayer services without distribution of Holy Communion,” it said.