Cardinal Law guest at lunch in Irish College in Rome 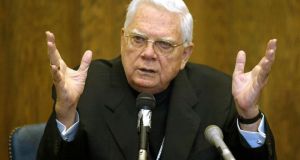 The former Cardinal Archbishop of Boston Bernard Law, who resigned from the post in 2002 amid allegations of cover-up in the handling of clerical child sex abuse allegations, was one of the main guests at a special St Patrick’s Day lunch in Rome’s Irish College.

Another guest at the top tabe at the dinner was controversial Cardinal Raymond Burke, currently prefect of the Vatican’s Apostolic Signatura, its Supreme Court. Last December Pope Francis omitted to re-appoint him to the Vatican’s Congregation for Bishops.

Also a guest at the lunch was Minister for Jobs, Enterprise and Innovation Richard Bruton. However, his spokeswoman said last night he “was not aware of other guests attending.”

In June of last year, during debate on the Protection of Life during Pregnancy Bill, Cardinal Burke said Taoiseach Enda Kenny’s description of himself as a taoiseach who happens to be a Catholic, but not a Catholic taoiseach, “does not make any sense”.

He said. “One cannot, as a Catholic politician, excuse oneself from the question of abortion by claiming one should not bring one’s Catholicism into the political realm.”

In February 2013 described the death of Savita Halappanavar as tragic. “It is, however, contrary to right reason to hold that an innocent and defenceless human life can be justifiably destroyed in order to save the life of the mother,” he siad.

Another guest at the St Patrick’s Day lunch was Bishop Brian Farrell, secretary of the Vatican’s Council for Christian Unity and a member of the Legionaries of Christ whose founder Fr Marcial Maciel Degollado was denounced in a Vatican 2010 document. It said Fr Degollado was “devoid of scruples and authentic religious sentiment” which allowed him to abuse young boys unchecked for decades.

“They attended along with other prelates, academics, politicians, diplomats, students and numerous members of the Irish community in Rome. All were in attendance to honour the national patron saint and this reflects the College’s long tradition of welcoming hundreds of guests and visitors on each Saint Patrick’s Day.”