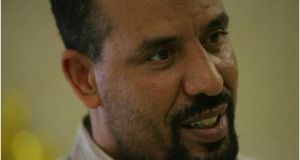 Dr Ali Selim of the Islamic Cultural Centre in Dublin’s Clonskeagh and a lecturer in the Mater Dei Institute and Trinity College.

A spokesman for the Muslim community in Ireland has called for radical change in the educational system to accommodate children with Islamic beliefs.

Dr Ali Selim, of the Islamic Cultural Centre in Dublin’s Clonskeagh and a lecturer in the Mater Dei Institute and Trinity College, has called for “a revolution of inclusivity” in Irish schools and “an upheaval in Irish educational perspectives”.

This was necessary to accommodate the needs of a society which is now “home to a variety of Christian denominations, as well as people of other faiths and of none”, he says in his book Islam and Education in Ireland, to be published next week.

Estimating that of approximately 65,000 Muslims in Ireland today as many as 20,000 would be in the under-18 school-going age, he relates difficulties these young people face when it comes to admission to schools, as well as their problems with PE classes, relationship and sexuality education, music and drama classes, and practice of their faith during school hours.

This continued despite a prohibition of discrimination on religion grounds by all recent Equal Status Acts, he says and quotes the example of a Catholic boys’ secondary school in Dublin that says in its policy statement: “Non-Catholic enrolment will only be considered in the event of being undersubscribed.” In its order of priorities for admittance the school only begins to consider the admission of non-Catholics at point number seven.

More generally Dr Selim says , “Muslim festivals are neither celebrated or marked in the calendar in Irish schools.”

He suggests they be days off for Muslim children. During Ramadan, the month of fasting, Muslims give to charity and schools could co-operate by “raising funds for the poor and the needy”. But, he points out, “any form of raffle is strictly forbidden in Islam”.

About the RSE programme in schools Dr Selim says there are “crucial differences” with Islam. It forbids pre- and extramarital sexual relations, whereas RSE perceives sexual relations outside wedlock as part of normal practices.”

He suggests there is “a clash of values” also between Islam and “traditional ways of teaching PE”. In some schools, “under the guise of health and safety, Muslim girls are obliged to take off their headscarves for PE classes, which is not acceptable to them”.

When it came to music some Muslims would see it as prohibited but “if music is performed using non-tuneable percussion instruments such as drums, most Muslims will have no problem”.

On school plays Dr Selim points out that “physical contact between members of the opposite sex who can be legally married is forbidden in Islam” and that “gender role-reversal is not permissible”.

Acting “in a way that may arouse sexual feeling or give sexual hints causes objection.”