Call for social welfare entitlements to be more ‘accessible’ to migrants 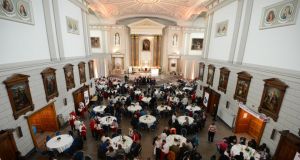 People entitled to social welfare support in Ireland, particularly migrants, do not receive it due to inadequate service from Government officials, according to Crosscare, an agency of Dublin’s Catholic archdiocese. The agency providing dinner for users of their services in 2012. File. Photograph: Alan Betson / THE IRISH TIMES

People entitled to social welfare support in Ireland, particularly migrants, do not receive it due to inadequate service from Government officials, according to Crosscare, an agency of Dublin’s Catholic archdiocese.

This morning. the agency disclosed “over 700 people” who presented to its information and advocacy services at Sackville Place in the city centre this past year “had no income of any kind available to them. Many were entitled to social welfare support, but poor information and service from staff in Government departments saw them lose out and face homelessness.”

Crosscare Information and Advocacy Services (CIAS) is based at Sackville Place, just off O’Connell St, in Dublin city centre.

It includes three elements brought together in February 2013.

These are Housing and Welfare Information, the Migrant Project, and the Refugee Service, which provide services from a ‘one stop shop’ centre at Sackville Place.

CIAS published its first annual report this morning. It said the centre was witnessing “large numbers of people in vulnerable situations who did not get their social protection rights from local social welfare offices. When Crosscare information officers intervene there is often a different outcome.”

It was the case that “clearly people with no income are extremely vulnerable to homelessness. Unfortunately we are dealing with people who have presented to local social welfare offices and local authorities with no income and walk away no better off,” she said.

She continued that “while we have had good engagement with the Department of Social Protection around the problems our clients encounter in their Department over the last two years this is not resulting in change on the ground. It is vital that our social protection mechanisms are less defensive, more user-friendly and to be accessible and navigable by the people who need them most.” Last year 5,000 people sought help from the CIAS centre “many in dire circumstances.”

It was were unable to assist 1,000 due to “over demand for our services,” but made 12,000 interventions of behalf of those they did help.

A majority of the people CIAS assists are migrants, about 90 per cent of whom were born outside Ireland.