Archbishop pledges assistance to any inquiry into illegal adoptions 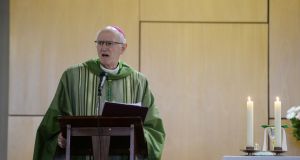 Archbishop of Dublin Dermot Farrell: ‘Illegal adoptions, whenever they take place, are just that: illegal, and any individual involved in the unofficial alteration of a birth certificate has committed a serious crime.’ Photograph: Alan Betson/The Irish Times

The Catholic Archdiocese of Dublin would assist any Government inquiry into adoption practices in this State, Archbishop Dermot Farrell has said.

“If a State inquiry is required into how adoptions were arranged, and this may well be the case, the diocesan archive would be available as a resource to it,” he said.

“The only adoption-related files not available – due to current legislation – are those relating to named individuals,” he said.

A further inquiry into the practice of illegal adoptions is seen as increasingly likely by members of the Government once the Cabinet considers an independent review into the matter next week.

The Minister for Children, Roderic O’Gorman, will bring a memo to Cabinet next Tuesday on the findings of a review launched by his predecessor Katherine Zappone into a sample number of potentially illegal adoption registrations.

The cases were drawn from about 150,000 records held by Tusla, the child and family agency, the Adoption Authority of Ireland (AAI), and an assortment of adoption agencies, existing and past.

Although a decision has not yet been taken in relation to whether a full inquiry will be needed after the review is published, Government sources say they believe it is likely, potentially in a non-statutory form.

The Department of Children is prioritising the drafting of new legislation to give adopted people access to their birth information, meaning that their right to information would likely trump another’s right to privacy. The heads of that Bill are expected at the end of this month.

On Thursday, Tánaiste Leo Varadkar said that the responsibility to remove barriers preventing adopted people from accessing their records falls on the Government and the Oireachtas. People who are adopted have recounted how they were told by Tusla that GDPR privacy legislation prevents them from sharing information about the adoptees’ biological families.

Mr Varadkar said when he voted for and supported the GDPR legislation initially, he understood “it would mean that people would have access to their personal information, that it would be protected and that it would be corrected where it was wrong”.

“The law on people who have been adopted, both legally and illegally, has been interpreted in a different way. In fairness to Tusla, it is just following the law as it understands it so the responsibility falls on the Government and Oireachtas to resolve this.”

Responding to queries from The Irish Times following the RTÉ Investigates programme on illegal adoptions broadcast on Wednesday night, Archbishop Farrell described it as “a powerful expose of the activity of illegal adoptions in the past. For those who suffer and continue to suffer, it revealed the raw pain and deep psychological hurt of family separation. I commend the bravery of those who participated in the programme.”

He said that “illegal adoptions, whenever they take place, are just that: illegal, and any individual involved in the unofficial alteration of a birth certificate has committed a serious crime. Both nefarious activities require investigation by An Garda Síochána. ”

The programme also addressed “the immediate need for the State to address outstanding legal impediments for those affected, and to do so as quickly as possible. As long as legal restrictions apply to accessing personal information then those already exploited as babies, through no fault of their own, will continue to feel discriminated against,” he said.

The Archdiocese of Dublin “supports the establishment of a clear and straightforward mechanism for tracing, with necessary resources, to assist those who are searching for their parents or children. This would be a practical step to enable information to be shared while also acknowledging that some individuals may wish to leave the past behind them,” he said.

“In recent years, the Government of Ireland has signalled its intention to enact legislation on tracing rights for adopted children and their mothers with due regard to the rights of all involved,” he said.

Archbishop Farrell also noted how, in the past, “as part of its co-operation with State commissions of inquiry, the archdiocese has provided access to diocesan archives which are also open to anyone with a valid reason to use them, such as academics, authors and advocacy groups.”