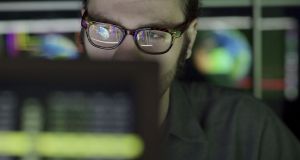 Moonshot CVE found more than 9,000 individual searches from Irish users for far-right topics during the six-month period which it categorised by gender, age and location. Photograph: iStock

An “unusually high” proportion of young males in Ireland are researching far-right topics online, according to a study carried out by a London-based counter-extremism group.

There are also twice as many online searches for far-right topics in Dublin compared with the rest of the country per head of population.

Some of this is down to the “commuter effect” where people from other counties use the internet while travelling to or working in the capital. But even accounting for that, the number of people searching for extremist topics in Dublin was unusually high, said Ross Frenett, founder of Moonshot CVE.

The next highest number of searches, weighted by populations, came from Carlow and Longford.

Moonshot receives funding from tech giants such as Google and Facebook and is hired by governments to monitor and counter online extremist content including from Islamic extremists and the far-right.

Its researchers used internally developed software tools to analyse searches for a list of terms associated with right-wing extremism and white nationalism in Ireland between September 2020 and February 2021.

They found more than 9,000 individual searches from Irish users for far-right topics during the six-month period which it categorised by gender, age and location.

There were fewer searches for far-right topics per head of population than in the US and UK, Mr Frenett said. However, Irish internet users showed an unusual propensity to search for “highly specific” topics, indicating they already had some knowledge of far-right topics such as the “great replacement”, a conspiracy theory which claims western governments are intentionally trying to replace native populations with immigrants and asylum seekers.

For example, there were more than 1,000 searches for the name of a Serbian nationalist song which is popular with right-wing extremists and which was played by the perpetrator of the 2019 Christchurch mosque shootings minutes before he opened fire.

“This is really weird compared with other countries,” said Mr Frenett. He said the most popular search terms in other countries tended to be for more well-known slurs and slogans associated with the far-right.

Popular search terms in Ireland include searches for anti-Semitic films and the main website associated with the QAnon conspiracy theory. “To be searching for them you would have to already have some level of knowledge of the far-right scene,” Mr Frenett said.

Some of the searches were also undoubtedly prompted by curiosity, rather than an affinity for the far-right, he said. Search traffic in the lead-up to the US presidential election, during which the far-right was frequently discussed in the media, was significantly higher than in the months which followed.

The Moonshot research was able to determine the age and gender of subjects in about 36 per cent of cases.

Some 81 per cent of these searches came from males, a much higher proportion compared with other countries, Mr Frenett said.

“We found in other countries like the US, New Zealand and Canada, the audience can be almost 50 per cent female.

“The stereotype is the ‘angry young male’. The data set hasn’t shown that to be the case in other countries but in Ireland it does seem to be much more clustered around younger men.”

The research covered the 32 counties. Moonshot expected to see a higher-than-average number of searches for far-right topics in Northern Ireland because of what Mr Frenett called the “intersection between the far-right and elements of loyalism”.

“But Northern Ireland was pretty much in line with the rest of the country,” he said.