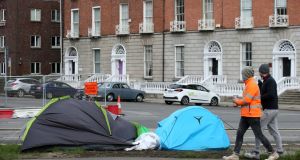 Homeless people have “no legal right” to pitch a tent on public property in the capital, Dublin City Council chief executive Owen Keegan has said.

Mr Keegan defended the council’s record in tackling homelessness and said there was an “unattractive” and “enormous enthusiasm” for highlighting rare cases where there were failures in the system. Certain people “seemed to make a living” out of highlighting these incidents, he said.

The council recently drew criticism from some politicians and homelessness activists for removing seven tents from the banks of the Grand Canal. The council said all the tents had been empty, some for several days, and their occupants had moved to temporary or permanent accommodation.

Speaking at a public interview with Lord Mayor Hazel Chu on Friday Mr Keegan said he believed the policy of removing empty tents from the city’s streets was correct.

“I would be personally of the very strong view that you have no legal right to pitch a tent on the public property. It’s not good for you, and it has all sorts of adverse impacts on the neighbours, etc.”

Circumstances might be different if there was a lack of beds for homeless people, but there was “plenty of emergency accommodation” and there were a range of different accommodation types available, he said.

The accommodation on offer was no longer solely “one night only” hostel stays, but longer term facilities from which people could access permanent housing.

“People rush to judgement and assume we are just evicting people without any regard to their wellbeing and that is not the case.”

There were occasions where people were failed by the State’s services, he said, and it was “entirely appropriate people would draw attention to failures in service provision but you sometimes get the impression that people are really enthused about undermining the service,” he said.

“There are people out there who seem to make a living from drawing attention to the odd case where the service level isn’t of the standard it should be but, overwhelmingly, I think it is providing a very good service.”

The council’s homeless services were not given credit for the majority of cases which were handled successfully he said. “One of the less attractive features Irish society is there is an extraordinary enthusiasm for bad news stories.”

Figures on Friday showed the total number of homeless people in the State has risen for the first time in several months, with the increase driven entirely by a continuing climb in homelessness among single adults.

Data from the Department of Housing shows there were 8,313 people, including 2,326 children, in emergency accommodation during the week of January 25th to 31st.

The figures represent an increase of 1 per cent from the 8,200 homeless in December, though a slight decline in family homelessness - from 970 families in December to 966 last month. The number of children in emergency accommodation fell by one.

Overall homeless had been falling since March 2020 - the start of the pandemic - when there were 9,907 people in emergency accommodation.