Archbishop Diarmuid Martin: ‘The church is imprisoned in its past’ 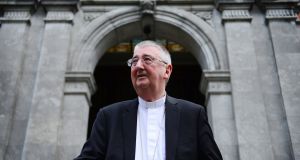 The Catholic Archbishop of Dublin, Diarmuid Martin, turned 74 on April 8th. He has a year to go before submitting his letter of resignation to Rome, as required of all Catholic bishops when they reach 75.

The two auxiliary bishops in Dublin must submit their resignations to Rome even sooner – Bishop Ray Field turns 75 next month with Bishop Eamonn Walsh following in September.

Archbishop Martin, the most influential Catholic prelate in Ireland, is 15 years in his role this month, having succeeded Cardinal Desmond Connell. He is 20 years a bishop and next month marks a half century since his ordination.

Does he think he will be allowed to stand down?

He says the big change will not be him and his auxiliary colleagues moving on but rather the “realities of the diocese”, which are “changing enormously”.

“Others might say that may be a little time in which people can stand back and reflect and ask the questions: Where should we be going? What sort of bishop do we need? But I think there are too many serious problems that have to be addressed from the pastoral, personnel, financial situation – you can’t allow that to drag on.”

He acknowledges Cardinal Connell was persuaded to stay on for three more years after turning 75. “I think it wasn’t a good thing,” he adds.

The archbishop may stay in Dublin post-retirement, in which case he would need to look for new accommodation in the city. “My mother always said that if she could get an apartment in Nelson’s Pillar, that would be her choice,” he smiles.

Was the church in Ireland now imprisoned by that past?

“You can’t whitewash it. The church has to re-find its future. The church is imprisoned in its past – not just by the abuse thing – in a whole culture and that culture doesn’t respond any more to the realities. Therefore you’ve to find creative ways of moving out and they’ll be very, very different. And they won’t satisfy a lot of people.”

He is concerned about those “cultural warriors” in the church who are resistant to change. “Saying ‘let’s restore what we had before and let’s be there, let’s be aggressive and let’s close our ranks’ – that isn’t the answer.”

Where schools are concerned, the archbishop worries “that you’ll have Catholic schools and other schools and that they’re almost hostile in their values, whereas what we need is an education system which respects difference but also fosters dialogue and contact rather than shouting at one another.”

He says Educate Together is a movement he respects and “there’s been a maturity in their response, but you could end up in a situation where you’d have more non-Catholic schools to simply be against Catholicism. That isn’t the answer either.”

On divestment, he says that all the projects about divestment have failed. “I’m not getting involved in the blame game. What’s emerging more and more is that all our understandings of what would happen were a little bit too naive.”

What should happen is that “in a number of areas you’d get schools and you’d identify, for the duration of five or six years, a primary school. Over that period of time you’d make a gradual shift from one system to another. That would also have to apply to teachers. There’d be a long-term evolution.”

He says there are now more members of the Government under the age of 45 than he has priests aged under 45. “The main body of believing Catholics and Catholic leadership belongs to a generation that is over 45, whereas the creativity in Irish society is coming now from another generation, and we’re not making the inroads.”

‘Vibrancy in the parishes’

That says there are two churches in Dublin devoted to young people – at St Paul’s (Arran Quay) and the University Church on St Stephen’s Green, which is “quite unique” and there is a “vibrancy in the parishes”. But the church has “to find a way in which young people not only begin to develop their belief, but their ability to take part in society inspired by that belief. We’re not generating that.”

He welcomed Taoiseach Leo Varadkar’s proposal for a new covenant between church and state in Ireland, mentioned in his address to Pope Francis at Dublin Castle last August. However, he is “not too sure it was a thought-out idea”.

What is needed “is a culture of dialogue and respect within society in which nobody is demonised and where people bring a contribution that is recognised”.

There is, he says, “a tendency growing in Irish political life of removing the real role of civil society in general, not just the church; that voluntary organisations who receive funding from the State end up working for the State rather than being an expression of citizens coming together in their own way”.

It was also the case that “we have a substantial number of believing Catholics who are feeling that the religious education they had received is no longer providing them with the answers or the ability even to enter a dialogue about the evolving reflection of what our world is.

There was somehow the idea that the Irish church could be reformed from outside. That’s not the case

“This is where we need a more vocal group of Catholics who can take part in the overall reflection of society precisely as believers, not as lobbying groups or bickering groups. Our schools should be doing that. We haven’t produced an intellectual Catholic leadership in recent times,” he says.

“Irish Catholicism was always a little bit cut off from the mainstream connections in Europe.”

He was critical of the apostolic visitations sent by Rome to reform the Irish church after publication of the Ryan and Murphy reports into child sexual abuse in 2009.

“There was somehow the idea that the Irish church could be reformed from outside. That’s not the case. The visitation was not very well planned.”

What irks him was that there was “a three-year period in which the natural progress that should have been taking place in the Irish Catholic Church – home-grown and home-led – was put in the freezer. It delayed reform.”

As to whether two Irish seminaries – at Maynooth and the Irish College in Rome – are sustainable, he says “probably not”.

He is interested in new forms of priestly formation. In Dublin “one seminarian, for various reasons, is now living in a parish and going to theology. We formed a small group to accompany him on that. It would be better if we had two or three.”

Are 26 Catholic dioceses in Ireland too many?

“The revision of dioceses in any country is a problem. In Italy, the pope has almost thrown his hands up in despair at that. There is a problem in the west of Ireland. There’s a great sensitivity there but there’s depopulation there as well.” On the idea of amalgamating of dioceses, the archbishop says there is no way around it.

In his 15 years as Archbishop of Dublin, what has stood out for him?

“Obviously dealing with some of the child sexual abuse and particularly the meeting with victims. If I were to look at an event, remember that [March 2011] service of repentance we carried out in the Pro-Cathedral.”

There was an atmosphere of tension there. “I always remember when it was over, sitting in the Pro-Cathedral were four couples, crying. I waited at the door and they came and said ‘good evening’. I didn’t ask them any questions. They didn’t ask me any questions. These were people with their own story.”

There was also the 2012 Eucharistic Congress, the pope’s visit, the World Meeting of Families last August. And parish communities. “For example, the pilgrimage to Lourdes every year with those 200 young people was an interesting experience.”

Was he disappointed at the turnout for Pope Francis last August? “You couldn’t but be,” he says. However some events during the visit worked very well. “I went to bed on the Saturday night very happy after bringing the pope to Seán MacDermott Street.” It was “a parish that was devastated by drugs, and it is. I had a lot of difficulty.” There were security problems but Archbishop Martin was determined it would happen.

There was also the event in the Pro-Cathedral (“You had 800 people that normally wouldn’t have been in contact”), the event with Br Kevin Crowley of the Capuchin Centre, and the Croke Park concert.

But from the Sunday morning,with publication of the Vigano letter criticising Pope Francis, “it was downhill”. Government and security people were warning that Phoenix Park was “going to be like climbing Croagh Patrick to get there. That, to the sort of people who were going to come, elderly people or people with families, put them off. Then it started to rain.”

But the archbishop was impressed by turnout on the streets of Dublin. “There were more people there than on St Patrick’s Day and it was genuine enthusiasm. In a lot of parishes people stayed and watched on screens. Maybe the idea of the big event is a thing of the past in Ireland.”

He spoke to Pope Francis after his meeting with abuse survivors on the Saturday evening.

“I talked to him in the car about the victims and he was genuinely moved. The first thing he said to me was: ‘I’ve written my notes and I’m going to rewrite the things tomorrow [for the Phoenix Park Mass].’ If you read it, it was quite strong. If I’d said some of those things in the past, Cori [Conference of Religious of Ireland] would have kneecapped me.”

He adds: “I would have been shot – by the church. [The pope] talked about exploitation of children. If you look at the phrases, they are very strong.”