Immigration: System of re-entry visas and renewals to end next month 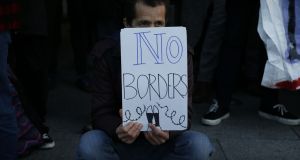 A protest at the Burgh Quay immigration office, where a delay in obtaining appointments has led to bots block-booking and reselling slots. File photograph: Nick Bradshaw/The Irish Times

The re-entry visa system, which requires immigrants who wish to travel to and from Ireland to apply and pay for permission to re-enter the country, is to be abolished.

Minister for Justice Charlie Flanagan announced on Friday that the re-entry visa system would end from May 13th, 2019 and that foreign nationals with a valid Irish Residence Permit (IRP) or Garda National Immigration Bureau (GNIB) card would no longer require a visa to leave and return to Ireland. The change of the system is expected to affect more than 40,000 people living in Ireland.

To date, foreign nationals living in Ireland have been obliged to apply for a re-entry visa every time they travel outside the country.

The large demand for re-entry visas, coupled with the rising demand for visa renewals, has led to a large backlog in the Irish Naturalisation and Immigration Service (INIS) online appointment booking system.

These long delays in securing an appointment at the Burgh Quay immigration office has resulted in unofficial operators block booking slots which are sold online to foreign nationals for up to €40. The Department of Justice initially responded to reports of block-booking by internet bot programmes by introducing software changes. In December 2018, it announced that the online system would be replaced in 2019, with the tender process for the site still ongoing.

Under the new system, foreign nationals will be able to show their passport along with the IRP or GNIB card to prove to airlines and immigration officials that they have the right to travel to Ireland and will be exempt from the requirement to hold a visa. Minors under 16 years of age and diplomats must continue to apply for a re-entry visa while foreign nationals in the process of applying for an IRP card will need a multiple-entry visa to travel during the first four months of their stay in Ireland.

A statement from the department noted that improvements in security around the IRP card had made it possible to eliminate the need for re-entry visas “without compromising the safety and security of the visa or immigration system”.

It added that the decision to delay ending the system until May 13th was due to the need to notify airlines, ferry companies and immigration authorities about the Irish change in the system.

Until this date, foreign nationals will continue to need a valid visa or re-entry visa to travel to Ireland.

The decision to end the re-entry system will also “remove and administrative burden from visa-required nationals” living in Ireland who hold an IRP card, said the department.

They will no longer have to submit their passport to the INIS for processing nor will they have to pay the re-entry visa fee which costs €60 for a single journey visa, €100 for a multiple journey visa and €160 for an emergency visa. Re-entry visas for minors under 16 will be issued without charge, according to the department.

The IRP card was introduced in 2017, replacing the GNIB card which was issued to non-EEA nationals with permission to live in Ireland.

The initial announcement of the abolition of re-entry visas led to some confusion after the news was mistakenly published on the department’s website earlier this week informing foreign nationals of the new system but without confirmation of when the changes would come into effect. The announcement was taken down from the website but reinstated on Friday afternoon with additional details.

Mr Flanagan said he was delighted to announce the abolition system which he described as the first in “a series of improvements” to immigration customer service over the coming year.