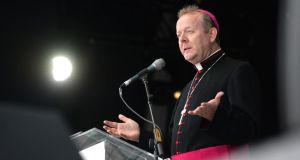 Catholic Primate Archbishop Eamon Martin has called for removal from the RTÉ Player of an “outrageous clip” broadcast during its New Year’s Eve countdown show.

The programme, broadcast on RTÉ One television on Thursday night , included a satirical Waterford Whispers News report “accusing God of rape & reporting his imprisonment,” the archbishop tweeted on New Year’s Day. “This outrageous clip should be removed immediately & denounced by all people of goodwill,” he said.

He expressed shock “that the producer/editor” of the programme “didn’t realise how deeply offensive” it was.

In a second thread to his tweet, he continued: “To broadcast such a deeply offensive and blasphemous clip about God & Our Blessed Mother Mary during the Christmas season” on the programme and “on the Eve of the Solemn Feast of Mary, Mother of God is insulting to all Catholic and Christians”.

The archbishop added the Twitter handle of RTÉ director-general Dee Forbes to his tweet. Contacted by The Irish Times about the item , a spokeswoman for RTÉ said the broadcaster had “no comment”.

The 23-second clip , read by former RTÉ newscaster Aengus Mac Grianna, began: “In yet another shocking revelation this year God became the latest figure to be implicated in ongoing sexual harassment scandals. The five billion year old stood accused of forcing himself on a young Middle-Eastern migrant and allegedly impregnating her against her will before being sentenced to two years in prison with the last 24 months suspended.”

As the report was read footage was shown of a bearded older man in white and wearing glasses being escorted by a garda outside Waterford courthouse to a Garda van and protesting: “It was 2,000 years ago.”

The item was followed by a mock report on US film producer Harvey Weinstein, sentenced last year to 23 years in prison for rape and other sexual offences , whom, it claimed, “requested a retrial in Ireland”.