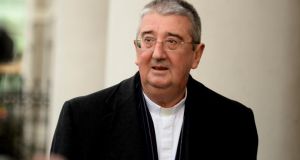 Archbishop Diarmuid Martin: ‘I think some of the, what I would call, educational establishment in the Catholic Church are dragging their feet.’ Photograph: Cyril Byrne / The Irish Times

At DCU in September 2006 Archbishop Diarmuid Martin said “the fostering of plurality of educational patronage is something desirable and welcome in Ireland today and could bring benefit to all”.

He observed that pluralism in religious belief had entered a new chapter: “In this new reality, the school must become a primary focus for fostering a climate of knowledge about various religions and about dialogue and mutual respect among different religious traditions.”

He has reiterated both views in the nine years since, but brother bishops and others in church authority remain curiously unmoved.

In its June 2012 report the Forum on Patronage recommended development of Education about Religion and Beliefs (ERB) and Ethics programmes for primary schools. Such programmes should not be a replacement for faith formation, it said.

He found it “bizarre” that a faith-based school would have to offer “what is essentially a secularist understanding of religious faith”.

The Archbishop’s impatience is not limited to those within the Church – last April he spoke of how pluralism in patronage had run up against opposition at local level, including from local political representatives, including some from the Labour Party,

To date just one Catholic school has been divested to a non-religious patron. In March last year a deal was agreed with the Edmund Rice Schools Trust, which owns the former Christian Brothers school at Basin Lane, Dublin, to lease it to the Department of Education for 10 years for use by Educate Together. But it is already in trouble.

Last August it emerged the lease contains conditions which limit the school’s ability to expand and which may threaten its viability. The Church has also surrendered Burren national school in Castlebar. It closed over 20 years ago and requires substantial refurbishment.

“Enthusaism” is hardly the word that comes to mind.