All Hallows College to close due to falling student numbers 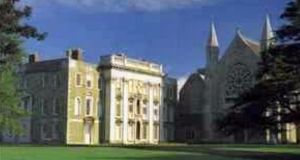 All Hallows College is to close due to its inability to attract students in recent years.

It was formally announced this afternoon that All Hallows College in Dublin is to close. In a statement, the college said it was making the announcement “with huge regret and deep sadness”.

“The college, which is not in receipt of State grants, has been operating at an increasing deficit over many years, and although in recent times it has embarked on a stringent programme of sustainability - including increasing its activities and embarking on an extensive fund-raising programme - the challenging landscape of today’s third level education arena has led to a diminishing of the college’s reserves to an unsustainable level,” the statement said.

“In addition, the option of growing enrolment figures has been constrained by the cap on the numbers of undergraduates eligible for the free fees scheme. The wind down of the college will begin immediately and will be conducted in a phased and orderly fashion.”

Currently there are 450 students on accredited degree courses and in excess of 70 staff at the college. It said “every effort will be made to facilitate existing students in the completion of their courses and the college’s administration will be in contact with current applicants. The college will commence a 30 day statutory consultation period with its staff in the coming week.”

The statement concluded that “today’s decision has been taken mindful of the long history of the college, its proud traditions and its contribution to education in Ireland. All Hallows College has educated generations of leaders and professionals; serving communities in every corner of the world since 1842, and has been under the stewardship of the Vincentian congregation since 1892.”

A statement from Dublin City University, of which All Hallows is a constituent College, said it too was “greatly saddened by today’s announcement”.

“While DCU has no governance or management functon with respect to All Hallows College, we have enjoyed a collegial partnership since 2008, during which time DCU has accredited the college’s degree programmes and provided access to supports such as library and IT services to All Hallows’ students,” it said.

All Hallows College has been at the centre of controversy in recent weeks since it offered for auction a cache of letters written by Jackie Kennedy to Fr Joseph Leonard between 1950 and 1964, when the priest died.

The college had hoped to auction the letters but withdrew them from sale after communication from the Kennedy family.

Estimates had suggested the letters could sell for more than €1 million.

All Hallows College has been part of Dublin City University since 2008 but its origins date back to 1842, when Fr John Hand founded a college to train priests for foreign missions.

In February 1842, after receiving a request from Rome to open such a seminary, he began looking for a suitable location and found Drumcondra House.

Its last occupiers had been Sir Guy and Lady Campbell. Sir Guy was a general in the British army and Lady Campbell was the daughter of Lord Edward Fitzgerald who was executed for his role in the 1798 rebellion.

Fr Hand leased the house and, at the suggestion of the Catholic Archbishop of Dublin Daniel Murray, he called it All Hallows.

The then Lord Mayor of Dublin Daniel O’Connell contributed £100 to the new College.

Since 1892 it has been run by the Vincentian congregation.

With the Famine and consequent emigration the new priests from All Hallows followed the Irish Diaspora, to Canada, the US, Australasia, Britain, South Africa and other countries.

Over the years, as many as 5,000 men went to some of the world’s major cities.

All Hallows alumni were the largest group of secular priests in California up to the late 1890s.

In the 1980s, as the number of seminarians decreased, the college opened its doors to lay students, and degrees and courses evolved in areas such as social justice, ethical leadership, church and culture.

Students from other countries have also been educated there, many from countries where All Hallows priests served. However, in recent years it has struggled to attract students.

Famously former Taoiseach Bertie Ahern spent a lot of his formative years around the college where his father was head gardener. The former taoiseach often credited his affinity with farming and country people to his experiences at All Hallows.