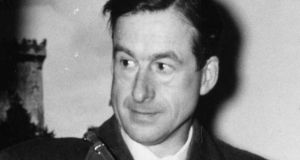 Evidence that a gynaecologist at the National Maternity Hospital on Holles Street, Dublin, faked documents to facilitate four illegal adoptions over 60 years ago will be aired in an RTÉ Investigates programme on Wednesday night.

The late Prof Éamon de Valera, a consultant gynaecologist and son of the former president, was identified by the Irish Mail on Sunday in 2015 as having facilitated illegal adoptions.

Wednesday night’s programme reveals four such cases in which he had also been involved, almost a decade after the Adoption Act 1952 came into force.

Brenda and Brian Lynch were two of the children so adopted with Prof de Valera’s assistance.

The programme shows that Mr Lynch’s adoptive mother, a patient of Prof de Valera’s, went to St Brendan’s Nursing Home at Percy Place in Dublin on her pretend due date, to emerge with Brian, the child of an unmarried mother. Fearing her children would face the stigma of adoption, their adoptive mother never told them the truth.

Prof de Valera also facilitated the illegal adoption of Mary Flanagan, who was born in March 1961. She never knew she had been adopted until October 2019. Then, she and her sister Anne were told by Tusla, the Child and Family Agency, they and their late brother, Séamus, were not the biological children of the couple they believed to be their parents.

Dublin woman Susan Kiernan’s birth mother was charged £85 by the nuns for maintenance though she had already been adopted. The fee was £85, equivalent to €3,200 today, and when she did not pay, the Sisters of Charity pursued her, the programme reveals.

Two months after Susan’s birth, they threatened to send the child back to her mother. However, Susan had been adopted four days after her birth.

A year after Susan’s birth, her biological mother was still struggling to pay the nuns. They began phoning Arnotts, where she worked, pointing out that the balance due was £82-10s. In correspondence a nun said, “If you do not send, my collector will call to see you. She would prefer not to have to do this as it might be embarrassing for you and we want to safeguard your reputation. We have not failed you; you have failed us.”