Opinion: We need a reform of prevailing settlement strategy 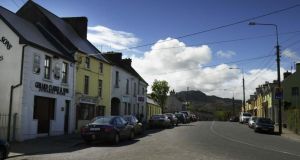 Many villages are faced with a problem of disused or dilapidated shops. Photograph: Frank Miller

Recently elected county councillors in rural Ireland are setting out priorities. While they become familiar with their new surroundings they will see how the recession has damaged socio-economic networks.

As Ireland’s economic recovery gains momentum these rural councils must ask why the gains are not being spread more widely. Commercial life is ebbing from small rural centres and this is producing a skewed community profile. As agriculture becomes more mechanised its support services are coming from larger urban centres and this is having a knock-on effect on the rural community. Villages and small towns are occupied, more and more, by the old and the dependent. We have to address the disconnection between the farming sector and the villages that have relied so much on supporting it.

These small settlements are losing the community infrastructure that provides identity and pride. Many of them are faced with a growing proportion of disused and dilapidated shops and they need to find a new role in order to survive and prosper. The alarm has been raised by the postmasters, schoolteachers, publicans and other stakeholders, including the Garda stations, who feel that they are under pressure from growing centralisation. They need to regain the clustered activity that sustains them. Above all, the random spread of housing over hills and away from villages must be halted because this dispersion is sundering the rural support system. When country people move beyond walking distance they are more inclined to leave the village behind and drive into town to do business. This decision is, of course, partly informed by the difference in food bills.

If we acknowledge this structural change we can begin to apply a solution for rural renewal. The planning code can nurture partnerships to sustain villages and small towns. But the remedy may appear challenging because it requires a reform of the prevailing settlement strategy. An early priority has to be the diversion of new housing into villages where it can use the infrastructure offered by nearby schools and businesses.

Policy of renewal This will, in turn, bring a sustainable virtuous circle, with a better quality of life and less rural isolation. Children can walk to school and their parents can meet neighbours at the post office. Local GAA clubs will get members closer to home. If rural publicans are to secure their future they need to keep their customers close-by; pedestrian access will reduce deaths from drink-driving.

This reform requires an alliance between stakeholders in shops, churches, sports clubs, post offices, schools and pubs. It appears strange that these groups have a common cause and yet they have failed to combine their efforts. They need a convenor. County councils must bring together the valuable community resources embodied in the villages.

This virtuous circle would have wider benefits because the change can contribute to other sectors of the economy. Ireland’s village network is an invaluable resource for the tourism industry and it should be more vigorously supported by Fáilte Ireland. Village businesses would greatly benefit from the development of the green ways and other tourism initiatives. Money spent by recreational visitors can make the difference between viability and failure for small out of the way businesses. Remember how successful riverside stops by cruisers are for businesses on the river Shannon and other waterways. Those who visit the Gaeltacht can also see how this works; they are surprised at the choice of shops and pubs where the local trade alone would not sustain it.

The agricultural sector is well organised and has a lot of political expertise. This has brought farmers great rewards but success has overshadowed the decline of neighbours in villages. We should admit that the agricultural agenda no longer coincides with the welfare of the villages.

Political action The recession has

revealed two rural agendas. It is for this reason that we need the county councils to direct the remedy.

The Minister for the Environment must issue a directive limiting the spread of random rural housing. This could be done by allowing not more than 10 per cent per annum outside the urban speed- limit zone. We could expect a positive outcome for villages. Lifting the pollution burden of septic tanks would also bring a cleaner environment for rural dwellers. There would be less rural isolation and the age profile would be more balanced. This reform should, however, be given a time limit. Those county councils that fail to reform, by acquiring plots/sites for village housing and implementing them within a decade, should be amalgamated with neighbouring more progressive councils. Dr Diarmuid Ó Gráda is a planning consultant