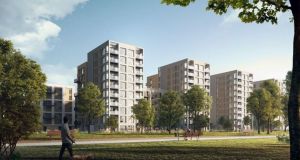 Developer Andrew Gillick has offered a complex of 471 apartments at the site of the former Chivers factory in Coolock to the State for social housing.

Plans for almost 500 apartments in blocks nine storeys tall in north Dublin that could be used for social housing have been described as “greedy” and “disingenuous” by Dublin city councillors.

Developer Andrew Gillick at a meeting on Monday told councillors he has offered an entire complex of 471 apartments, at the site of the former Chivers factory in Coolock, to the State for social housing.

If it was accepted, the complex would be the largest social housing estate provided under the Government’s enhanced leasing scheme, introduced almost two years ago.

However, councillors told Mr Gillick he had acted “in bad faith” and had misrepresented his plans for the site.

Two years ago, he asked councillors to rezone the former jam factory for housing with approximately 350 apartments in blocks up to five storeys proposed.

However, earlier this year following the rezoning, he lodged an application with An Bord Pleanála for 495 apartments in blocks up to 10 storeys. The board granted permission two months ago reducing the height to nine storeys and the number of apartments to 471.

Independent councillor John Lyons said the scheme was “a monolithic monstrosity that will totally destroy the area”. Mr Gillick had originally proposed a low-rise development and had “disgracefully deceived” by seeking a high-rise scheme he said. “It seems to be your greed that is driving this,” he told Mr Gillick.

Fianna Fáil councillor Tom Brabazon said Mr Gillick had presented a particular “vision” when he was seeking the land to be rezoned from industrial to residential. “That vision was torn up. I think we’ve been dealt with in bad faith and I would be very slow to rezone again. This has left a sour taste.”

Mr Gillick said it was his view he had “under-promised and over-delivered” in what he was offering the State in terms of housing.

“I am creating housing. If you want to have the whole thing as social housing that’s 500 units, more units than Dublin City Council have done in the last two years.”

He said the heights he had initially discussed with the council were the maximum allowable at the time. However, last December Minister for Housing Eoghan Murphy removed the caps on the height. Mr Gillick said this “put an onus on me to maximise the use of the land”.

Several councillors pointed out this meant developers were permitted but not obliged to increase the height of apartments.

The Green Party’s Donna Cooney said tall apartment blocks had been shown to be unsuitable for social housing because of maintenance costs and the potential for fire issues.

“These things are just blocks of very high rise. It wasn’t successful in Ballymun, it had to be demolished.”

Fianna Fáil councillor Racheal Batten said €2 billion had to be spent to fix the problems of Ballymun. “I would caution against taking over a whole premises like this.”

The council’s head of housing, Brendan Kenny, on Monday said the council was “not keen” on taking the whole Chivers development but would consider using 30 per cent for social housing.

While homes have yet to be provided under the enhanced leasing scheme introduced in January 2018, the city council has signed a deal with Bartra Capital to lease a block of 23 apartments currently under construction in Stoneybatter in Dublin 7.