Over 1,500 asylum seekers may get residency under reforms 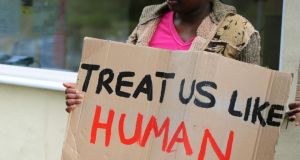 More than 1,500 asylum seekers whose refugee applications have been rejected are likely to benefit from the right to reside here under proposals being drawn up by a Government working group.

Under the existing system, thousands of asylum seekers have spent anything up to 10 years waiting for their status to be resolved.

A working group which has been reviewing the system is understood to have proposed that asylum seekers in the system for more than five years should be able to avail of a fast-track decision within six months.

Sources familiar with the proposals say in practice this will involve officials casting a “sympathetic eye” on applications by asylum seekers for leave to remain in the State.

Government members are cautious to avoid any use of the term amnesty, but one senior source said internal estimates are that upwards of 1,500 people would be entitled to benefit.

Many of those seeking refugee status have had their applications rejected, but are challenging these decisions in the courts or seeking leave to remain in Ireland.

These individuals will be required to drop their legal actions to avail of the fast-track decision-making process.

The proposal is one of a number of recommendations expected to be published over the coming weeks. Other proposals include:

Giving young asylum seekers, who have been resident here for five years, the same access to third-level education as Irish students. At present asylum-seeking students are treated as international students and face prohibitive fees

Increases in weekly allowances paid to asylum seekers, set at €19.10 for adults and €9.60 for children. They have not been increased since they were introduced 15 years ago.

The 10-member group, chaired by Mr Justice Bryan MacMahon, includes representatives from non-governmental organisations and the Department of Justice, is due to finalise its report to Government shortly.

The Irish Refugee Council resigned from the group earlier this month on the basis that it was not consulted about key legislative proposals.

Minister for Education Jan O’Sullivan voiced support on Wednesday for improving access to third-level for asylum-seeking students. She said the high fees they faced effectively excluded them for a “future they have worked hard to achieve”.

“I am determined this will change from September 2015 for students who have spent five years or more in the Irish education system. I believe such students should no longer have to pay any more to access third-level than their Irish friends do, and that they should be have appropriate access to student supports.”

But she said the right to work for asylum seekers existed in all other EU countries except Ireland and Lithuania.