On the road to somewhere: the bus driver’s tale 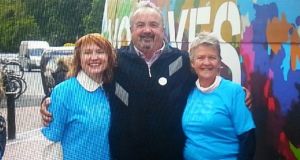 When he got the job driving the Marriage Equality bus, Andy Wilkinson could count his encounters with homosexuals on one finger. His wife’s daughter had a gay friend. He was alright. He didn’t have a lot to do with him.

Then the 53-year-old Dundee native, who works as a driver for Extreme Ireland, got a job that would change his life.

Wilkinson was asked to drive the Marriage Equality bus carrying Yes vote campaigners around the State. It was just a job.

The bus had been plastered with the colourful stickers of the Yes Equality campaign.

The bus was full of excited lesbian, gay, bisexual, transgender and straight campaigners. There were balloons.

It wasn’t long before beer-drinking, Dundee United-supporting, husband, father and grandfather Wilkinson was joining in with his passengers. The Yes campers would crank up Pharrell Williams’s Happy to get them ready for the next stop, the next town, the next people to canvass - and Wilkinson would find himself singing along.

He had trained as a bus driver in 2010, using his redundancy payment from the Irish construction nosedive.

In the four years since, he has driven all sorts of people around Ireland. These people were different though. Different.

“Since I’ve come on this tour, it hasn’t been like work. This is more like friendship,” he says, mentioning that he has already got a rake of email addresses and mobile-phone numbers to keep in touch with everyone. And he plans to collect more.

As an Irish citizen, Wilkinson has a vote and will be going to his polling station in Swords to vote Yes.

He has mixed emotions, though. “We want a Yes vote but we don’t want the tour and the camaraderie to end. Maybe we can have a celebration tour,” he says.

Driving “Miss Monninne, Miss Mary and all the Yes crew” has changed Wilkinson’s mind. About everything.

“They are just normal, loving people and all they want to do is have the right to live and be happy with the person they love.”

He wants all the “Joe soaps who give abuse to people campaigning for a Yes vote” to know this.

“The girls and boys on this bus get abuse on the street. They are so polite, but I have seen them walking back and crying. Anyone who saw that would change their minds. I have.”