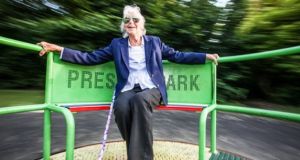 Dr Sean Healy, director of Social Justice Ireland said the level of population ageing expected over the next 15 years will be associated with higher levels of disability and long-term ill-health. He said now is the time for planning and investment. Photograph: Getty

The number of older people in Ireland looks set to almost double over the next 15 years, according to new research.

By 2031, there will be nearly one million people aged 65 or over - a rise of 86.4 poer cent, a policy briefing from Social Justice Ireland has found.

During the same period, some 136,000 people will also have aged to 85 years or more, representing an increase of 132.8 per cent prompting researchers to warn the demographic change could put a strain on services and infrastructure.

Dr Sean Healy, director of Social Justice Ireland said: “This level of population ageing will be associated with higher levels of disability and long-term ill-health and now is the time for planning and investment.”

The findings have been published in Social Justice Ireland’s National Social Monitor 2016 which outlines the current situation on a range of policy issues that impact on people’s well-being.

The report also found there has been a 17 per cent reduction in the number of home help hours delivered since 2008 leaving some families struggling to cover the gaps in care for their elderly relatives.

Michelle Murphy, a research and policy analyst with Social Justice Ireland, said: “With an ageing population, the acute hospital system will be unable to operate effectively unless there is a greater shift towards primary and community services as a principal means of meeting patient needs.

“A commitment to supporting people at home is only aspirational if funding is not provided for home help services, day care centres and home care packages. These are the very areas which must be the subject of investment to address population ageing.”

Meanwhile, environment and sustainability were among the other issues covered in the annual monitor with calls for “major changes” on the climate policy to enable the Government to meet the EU2020 targets.

The National Skills Strategy should also be “fully resourced” to help those who are unemployed and there were appeals for better investment in rural broadband.