Number of homeless families in Dublin up 40% since June 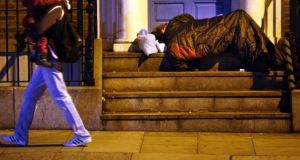 There were 371 families, with 803 children, in emergency accommodation in Dublin last month – an increase of more than 40 per cent since June last year. File photograph: Dara Mac Dónaill/The Irish Times

The number of families with children becoming homeless in Dublin continues to rise, data from the Dublin Region Homeless Executive (DRHE) shows.

There were 371 families, with 803 children, in emergency accommodation in Dublin last month – an increase of more than 40 per cent since June last year.

In that month, which is when the data was first gathered in a comparable way, there were 264 families with 567 children in emergency accommodation in the capital.

The number of children in such accommodation has increased in almost every month since June. Between December and January, there was a sharp increase, from 331 homeless families and 726 children to

The vast majority of these children have come from the private rental sector – their parents were unable to afford increased rents.

This is money the executive has had to divert from other homelessness services in the city. The bill shows no sign of being reduced this year.

Outside Dublin the numbers of children in emergency accommodation have fluctuated, from a high of 164 last July, to 156 in August, 160 in September, 118 in October, 146 in November and 154 in December, according to figures from the Department of the Environment. No figures for this year have yet been published.

“Until you get to the point where you actually provide sufficient social housing, you cannot lessen the scale of demand here,’’ said Mr Kenny.

Charities working with homeless families say, however, they cannot wait the 18 months to two years for a social housing construction programme to deliver. Focus Ireland has described the impact on children of living in hotel accommodation as a “child welfare crisis”.

Mike Allen, director of advocacy with the charity, welcomed the indication from Minister Kelly that he was considering rent regulation.

“He must move on this urgently,” said Mr Allen.

He said that once this was in place the Department of Social Protection should increase the caps on the rents that rent supplement recipients may pay “to realistic levels that will meet market rents”.

While the majority of families coming into homelessness were from the private rented sector, he said there was a growing concern that escalating repossessions would see an increase in numbers coming from the owner-occupier sector.