Solidarity TD Ruth Coppinger and People Before Profit TD Bríd Smith have claimed in the Dáil that a pregnant woman who has discovered that her foetus has a fatal abnormality has been denied an abortion. Video: Oireachtas TV 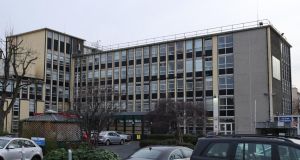 The Coombe hospital has issued a statement saying its board had no role whatsoever in certifying a termination of pregnancy. File photograph: Niall Carson/PA Wire

The pregnant woman who the Dáil heard was denied an abortion despite two consultants’ approval has said she will travel to England next week for a termination.

She said she had not wanted to speak to the media initially but spoke to The Irish Times after the Coombe Hospital issued a statement.

The hospital declined to comment on the individual case but said its board had no role whatsoever in certifying a termination of pregnancy.

“Insofar as recent media coverage has stated that the Board has had a role in determining whether or not the criteria for certification have been met, those reports are untrue,” the statement said.

The woman and her partner intend to travel to England next week, where the woman will undergo a termination, having borrowed “about €1,000” from family to cover the cost.

“Me and my partner only want what is best for our baby. It was our decision to go ahead with a termination.”

The woman was named in the Dáil on Thursday but told The Irish Times she did not want her name used “because of the potential backlash, not against just me but my family and my employer”.

She added: “It’s still a very sensitive subject in Ireland, I think.”

She contacted the TDs Bríd Smith of People Before Profit and Ruth Coppinger of Solidarity on Wednesday. They raised her case on Thursday in the Dáil, when Ms Smith named the woman.

Ms Coppinger said: “I have been contacted by a woman who has a fatal foetal abnormality that has been certified by two consultants.

“Now it appears the board of the Coombe Hospital is refusing her constitutional right that we all voted for to have an abortion at a time she chooses.

“Instead they have told her that she must wait another four weeks to see if there is a spontaneous miscarriage. At 13 weeks this woman went for her 12-week scan and they could clearly see at that point that the organs of the foetus were outside of the body. They brought her back a week later where that was fully confirmed when they got a better image,” Ms Coppinger said.

“One doctor, her consultant and another consultant was brought in who said yes, it is a fatal foetal abnormality but a week later, it went to the board, and the board overruled that.”