Nicola Kenny: A friend for 26 years, a mother for just one day 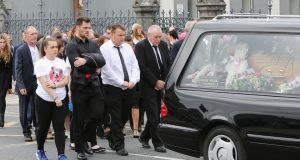 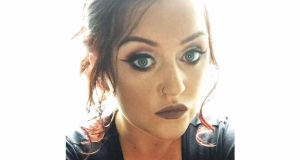 Nicola Kenny who was killed when the car she was travelling in was struck by a lorry. Photograph via Facebook.

The floral tributes spelled out the words “Friend” and “Mam”.

Nicola Kenny was a friend to many throughout her 26 years, a mother to her new baby Lily Rose for just one day.

Prayers were said at the funeral Mass in Thurles for Ms Kenny, whose death in a motorway crash on Monday cast a cloud of grief over her family, friends and community and shocked the country.

Prayers were also said for Lily Rose who was just one day old when her mother died; and for Ms Kenny’s aunt Irene, who had been driving the car when it was crashed into by a truck after she pulled over on the hard shoulder of the M8, and is now in a critical condition at the intensive care unit at University Hospital Limerick.

Ms Kenny’s mother Ann was also a passenger in the car and her injuries meant she attended the funeral – with her husband Patrick, son Patrick and the rest of the family – in a wheelchair and wearing a sling around her broken arm.

The car had stopped between the Cahir and Cashel motorway junctions to allow Ms Kenny take a call from Temple Street children’s hospital telling her there was no need to make the journey to Dublin as her daughter, who had been transferred there from Tipperary after her birth the day before after developing a temperature, was now well enough to go home.

A huge crowd gathered at the Cathedral of the Assumption in Thurles to say their last farewells to Ms Kenny, whose popularity was illustrated by the amount of young people present, including girls in the uniform of the Ursuline Convent she attended, and staff from the local Tesco supermarket where she worked.

Some of her friends wore Minnie Mouse t-shirts. They were in memory of her love of Disney characters and cartoons, but were also a reminder of her young age, as were the symbols of her life brought to the altar during the Mass: a Minnie Mouse headband; an Olly Murs CD; a pair of trainers to remember her love of fashion; and a framed photo of her friends.

Chief celebrant and local curate Fr Vincent Stapleton pointed out in his homily that, just a few short days ago, the town and county were celebrating Tipperary’s success on the hurling field and gathered in their thousands for the team’s homecoming on Monday night in nearby Semple Stadium.

“Little did we know that just down in the road in Kennedy Park the Kenny family and local community around them were left reeling from the cruel blow, as the news of Nicola’s tragic death in a road accident filtered through.”

The sense of shock and inability to comprehend what happened was “made so much worse by the knowledge that Nicola was just days into motherhood and she had just heard good news about baby Lily Rose when her own life came to an end”.

Ms Kenny “made so many connections” throughout her 26 years, from her love of family to her wide circle of friends and collagues, and brought her “childlike joy and vivacious personality” into everything she did.

During prayers later in the Mass, Fr Stapleton said Ms Kenny’s last great joy was the birth of her daughter. “We pray for Lily Rose now and ask Nicola and God’s guardian angel to continue to watch over her from heaven.”

A number of local priests con-celebrated Mass, along with Archbishop Kieran O’Reilly of Cashel and Emly.

Afterwards, the streets outside fell silent as the coffin carrying Ms Kenny’s body was taken from the cathedral and was placed in the hearse, before being brought on the young mother’s last journey to St Patrick’s Cemetery, her family following behind, her friends clutching balloons and red roses.