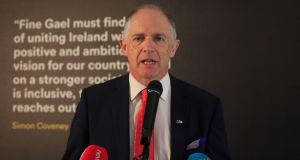 Minister of State for Equality David Stanton is expected to publish the National Traveller and Roma Inclusion Strategy by the summer. Photograph: Gareth Chaney/Collins

Measures which Traveller support groups insist are necessary to tackle exclusion from education and housing are absent from the latest draft of a Government strategy on the Traveller and Roma communities.

Minister of State for Equality David Stanton is expected to publish the National Traveller and Roma Inclusion Strategy by the summer.

A draft of the strategy, which is to run from 2017-2021, includes a guarantee that young Travellers and Roma would have a “good quality” job or educational opportunity within four months of signing on as unemployed.

Some 14 actions are detailed under “education” , including the development of “proactive, early intervention education welfare supports to support Traveller and Roma attendance” , and the rolling out of programmes celebrating Traveller and Roma culture in primary and secondary schools.

There is no commitment, however, within the document to restore the visiting teacher service or the provision of specialised resource teachers for Travellers. Seen by many educationalists as crucial for Traveller children - many of whom are in poverty and come from homes without a tradition of formal education – the supports were discontinued in September 2011, saving about €36 million.

It says the department will “assess if there are any barriers to Travellers accessing social housing”.

However, it falls short of recommending sanctions on local authorities which fail to provide Traveller accommodation, a penalty which has been sought by Traveller groups and the Irish Human Rights and Equality Commission.

More than 120 actions, under 10 headings, are outlined in the strategy . A programme, to be drawn up in partnership with the Traveller community, will “bring feuding to an end definitively over a period of time” and will include mediation services.

In his foreword to the document, Mr Stanton says the Traveller and Roma communities are “among the most disadvantaged and marginalised people in Ireland” and “suffered disproportionately from the . . . financial crisis”.

“We need to work together in a true partnership where Travellers and Roma groups and individuals strive just as hard as the Government to address the challenges,” he said.