Catholic Church’s idea of gender equality may be too little, too late

Woman who feels calling to priesthood says daughter asks: ‘How can you follow such an institution?’ 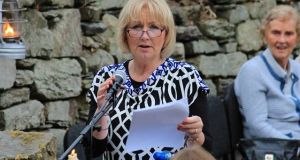 As the clamour demanding full equality for women in the Catholic Church grows ever louder indications are that it is beginning to make an impact at the very highest level.

Just this summer Sweden’s first Cardinal Anders Arborelius proposed that Pope Francis create a special advisory body of women similar to the College of Cardinals. Cardinal Arborelius was himself admitted to the college in Rome last June.

Similarly German cardinal Reinhard Marx, a member of the council of nine cardinals which advise Pope Francis, has called on the church to admit a greater percentage of women to its upper echelons.

“We would be mad not to use women’s talents. In fact, it would be downright foolish,” he said. The fact that only men can be ordained Catholic priests was “certainly not helping the church come across as a pioneer of equal rights”.

The church’s message must be inclusive, he continued, and “that is why I want to emphasise that positions of responsibility and executive positions in the church that are open to lay people must be shared by both men and women”.

Whereas admission to equality in church administration might be welcomed by some women, their glaring absence from clergy, whether as deacons, priests, or bishops, remains for most the true indicator of their second-class status as members.

Last year Pope Francis set up a commission to look at the possibility of admitting women to the diaconate, which is now also reserved for men only. The commission is a welcome step where women are concerned, but just that.

In Ireland, the Association of Catholic Priests has called on all dioceses to hold off on the introduction of the permanent diaconate until this commission reports and Pope Francis makes a decision based on its findings.

“We believe that proceeding with the introduction of a male permanent diaconate at this time, and thereby adding another male clerical layer to ministry, is insensitive, disrespectful of women, and counterproductive at this present critical time,” it said last week in a statement.

It was commenting after Fr Roy Donovan objected to a decision by Archbishop Kieran O’Reilly in his archdiocese of Cashel and Emly to set up a body to look at introducing the male-only diaconate there.

“What are the implications of this when already there are so many women involved on the ground, in all kinds of ministries, without been given much status and power? Have they not also earned their place at the top table?” he asked.

Fr Donovan told The Irish Times the response to his stance had been “all very positive, including men as well”. In his own experience no parish in which he had served could have functioned without the work of women.

He recalled a recent US study that indicated that as many as 66 per cent of parish roles there were filled by women. “The church is only going to lose if women are excluded from the top table, especially when it comes to younger women.”

One woman who believes she has a vocation to the Catholic priesthood is Dr Ann-Marie Desmond (54) of Timoleague, Co Cork. A teacher of religion and history, with a PhD in education and degrees in theology and history, she is married with two grown-up daughters.

Hers was a traditional Catholic upbringing in a devout family and with an aunt a nun. Even when her brother was an altar server she did not question why, then, she could not become one too. Girls are now allowed be altar servers, and in most parishes these days the altar servers are girls.

It was at third level education that Ms Desmond began to question things and later when, preparing for Masses, women like her “would organise everything, pick the readings etc., and a man [priest] would come in, take over, and celebrate it”. She has herself been a minister of the word and of the Eucharist.

Hers has remained “a very committed faith” but she had become “very anti the institution”, she said. This was not just because of its exclusion of women but also “of gay people, and people such as the divorced and remarried, from Communion. I would want a much more inclusive church,” she continued.

A lot of women like her retained “a deep faith but would no longer be followers of the Catholic Church”. She had explored other churches and admired in particular the inclusivity of Anglicanism in the form of the Church of Ireland, but “had stayed within [the Catholic Church] to speak out”.

The church needed priests, “a value-driven leadership”, she said but this should also include women. “I can’t see anything wrong with women celebrating the Eucharist,” she said.

The reason Jesus did not include women among the apostles was because of the culture of his time when women remained in the home, she said.

“Many of the apostles were also married,” she pointed out, as an indicator of the inconsistency of the church’s position on priesthood which now demands its priests be celibate.

She welcomed, “very, very cautiously”, the Pope’s commission on women deacons as, possibly, “a gradual evolution towards priesthood”. It was “a step in the right direction”.

But she wonders about the church’s future where younger women are concerned. “How can you be a follower of such an institution?” one of her daughter’s asked recently, reflecting on its exclusion of women.