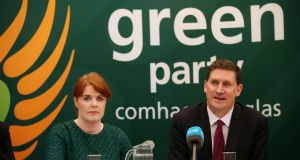 Students would be given free access to all public transport, similar to the existing scheme for pensioners, under proposals from the Green Party.

The policy, at an estimated cost of €60 million, is an element of the party’s pre-budget submission outlined on Thursday by leader Eamon Ryan, deputy leader Catherine Martin and Dublin city councillor Neasa Hourigan, who is the party’s finance spokeswoman.

Among its key budgetary policies for next year are a €1.1 billion investment in sustainable transport, green energy, organic farming and environmental protection, with €475 million of this towards the re-orientation of the “transport budget towards walking, cycling and public transport”.

Ms Hourigan said one of her priorities would be to improve rural transport links. “That would be very, very high on my agenda because there are people who are experiencing something that we have called a carbon lock in: that they have very few choices.”

She cited the example of someone who may want to buy an electric car but could not fund the necessary charger for it.

Mr Ryan said that, while big infrastructural transport projects take time to build, it “should not be that hard to start putting in really improved rural bus transport services”.

“That you can do next year. Similarly, my first preference in terms of urban areas, and indeed rural, [is] investment in walking and cycling, creating a fund where every council can bid in to say ‘we have this footpath that would actually transform the quality of that town’ so people could walk safely rather than drive to school.”

The Greens also want an increase of €20 per tonne in carbon tax next year. The Government and Fianna Fáil, whose support is needed to pass the budget, are likely to opt for an increase between €5 and €10.

Taoiseach Leo Varadkar and Fianna Fáil leader Micheál Martin want the proceeds of carbon tax increases re-invested in climate friendly policies but the Greens favour returning the receipts to all taxpayers in the form of a flat rate cheque. Mr Ryan said it would not be too late to change Fianna Fáil or Fine Gael policy on the issue if the Greens go into government with either after the general election, expected to take place next year.

Ms Hourigan said: “I think you need a green voice, whether it is in government or in the Dáil in general. If you look at the carbon tax, for example, there is a fundamental misunderstanding of what the carbon tax is for. It is not there to generate a fund, it is there to reduce emissions at the point of consumption.”

“It seems that Fine Gael, no matter how many times it is kind of outlined for them, don’t seem to engage with that. I do think you need that green voice and that perspective.”