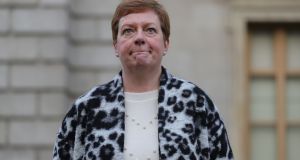 Samantha Long and her twin sister were adopted in December 1972 after nine months in the Navan Road Mother and Baby Home, with her birth mother Margaret later dying in a Magdalene Laundry. Photograph: Nick Bradshaw

Samantha Long, who was born in Saint Patrick’s Mother and Baby Home in Dublin, described the details of the commission’s report into the institutions as “absolutely horrific”.

Reading the harrowing testimony about the treatment of unmarried mothers in the homes on Tuesday following the release of the report after five years of inquiry, she said she “felt like vomiting”.

Ms Long and her twin sister were adopted in December 1972 after nine months in the Navan Road home, with her birth mother Margaret later dying in a Magdalene Laundry.

The picture painted of Irish society is one of “hurt and shame” where nobody stood up for young, vulnerable women: “Everybody is implicated, from the fathers to the nuns. For young women there was nobody to stand up for you, not even your Mam or your Dad,” she said.

Ms Long, who was a member of the Collaborative Forum for Survivors of Mother and Baby Homes, said the treatment of women in the institutions was “inhumane”.

Previously she had never described herself as a survivor until reading of the high infant mortality rates in the institutions in the report. “I am a survivor, I lived,” she told The Irish Times.

The women in the homes – both religious-run and owned, and State-owned – were kept “behind closed doors” she said, and were “degraded and belittled” during childbirth.

However, there was anger among some in the survivor organisations that the report appeared to conclude “everybody is at fault, yet nobody is at fault”, she said.

Saying she was “incredibly disappointed”, Rosemary Adaser said in laying blame at the feet of women’s families, the report did not heed “the rigidly-imposed” rules of the Church and State then in place.

Families of unmarried mothers going against those norms would have faced “moral and financial ruin”, she said.

Meanwhile, the report did not go far enough on the issue of “forced illegal adoptions”, and mothers giving up their babies were “captured in a system” where they had “no choice”, she said.

Reading the report, she felt survivors were being told “it wasn’t as bad as you lot make it out to be”, she said. The treatment of mixed-race children born in the homes had been largely “ignored”, she said.

In a statement, the Coalition of Mother and Baby Home Survivors said the “truly shocking” report vindicated campaigners. The coalition of survivors’ groups said it was wrong for families to send vulnerable, unmarried pregnant girls to be “incarcerated” in the homes.

Yet it said this did not entitle those running the homes to “deprive the young girls of their legal and constitutional rights, and the right to be treated with dignity and respect”.

“We must not overlook the fact that the Government and the Roman Catholic Church and Protestant churches ran the homes together hand in glove,” the statement said.

“What they did represents a damning indictment of Church and State. They jointly bear legal responsibility for the ill treatment and abuse and the gross breach of human rights that occurred in the homes, Catholic and Protestant alike,” it said.

The group criticised the report as “fundamentally incomplete” as it ignored the issue of “forced separation of single mothers and their babies”.

Another group, Irish First Mothers, described the report as a “whitewash” which had absolved the churches and State of “any systemic responsibility”.