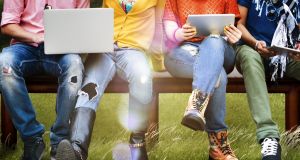 Irish adolescents had one of the lowest rates of life satisfaction among the EU/OECD countries with 28% rating their satisfaction with life as lower than five out of 10.

Teenagers in Ireland are among the least satisfied with their lives compared with their peers in other wealthy countries, according to new research from Unicef.

Irish adolescents had one of the lowest rates of life satisfaction among the EU/OECD countries, at 72 per cent. When asked to rate their satisfaction with life out of 10, 28 per cent of Irish teenagers said it was lower than five.

Teenagers in the Netherlands were the most satisfied with life, while those in Turkey had the lowest levels of satisfaction at 53 per cent, according to the research.

Despite this Ireland was ranked among the best when it came to child wellbeing in the 12th spot, with the Netherlands in the top spot, followed by Denmark and Norway.

The findings are contained in the latest report card research by Unicef, which has been running for two decades. It uses national pre-Covid data from EU and OECD countries to compare them across several measures of childhood wellbeing and development .

When it comes to the impact of the pandemic, the report warns that areas of progress on child wellbeing such as in education are at risk of falling back. Unicef notes the “catastrophic” impact of the pandemic on children’s wellbeing, mental and physical health and development due to anxiety, stay-at-home restrictions, school closures and economic loss.

The agency urged the Irish Government not to let the post-pandemic economic downturn impact on progress for children. “We must study the lessons learned during the last recession, when children bore the brunt of austerity measures. The Government must continue to invest in child wellbeing, during this difficult economic period, or face spikes in child poverty and inequality,” said Unicef Ireland executive director Peter Power.

Young people in Poland, Germany, Estonia and Greece were among the most uncomfortable with their bodies, while those in Iceland were by far the most satisfied.

Some 31 per cent of Irish children were overweight or obese, putting the country in the bottom half of the table in that category.

Ireland ranked sixth in the overall table when it came to children’s skills, in areas such as education and socialisation. Some 78 per cent of Irish teenagers had basic reading and maths skills, second only to Estonia.

Irish teenagers also ranked above average when it came to making friends, with 76 per cent of 15-year-olds reporting they easily made friends, the research found.

Parents in Ireland had more support networks than others in most countries, with Ireland ranked 12th highest in that category. However, more than one-fifth of parents in Ireland with young children felt they needed more childcare support, the fifth highest rate in comparison to other countries.

Irish parents also rated their relationship with staff in their child’s school as the joint highest, when compared with other European countries.

Government spending on services and tax breaks for families in Ireland was below the OECD average, the Unicef research found.

Ireland had the fifth lowest child mortality rates, at 0.64 per 1,000 children aged between five and 14, while Mexico had the highest rates.

Schools should not reopen after midterm unless safety improves, say unions 19:31
School ordered to reopen after closing due to Covid-19 fears 19:30
Rescue operation under way to prevent freighter hitting rocks 19:22
Brian Hayes says he considered resigning over Oireachtas golf dinner 19:21
Warning over impact of timber shortages due to forest licence backlog 19:14