Modular homes to be used in Dublin as permanent housing 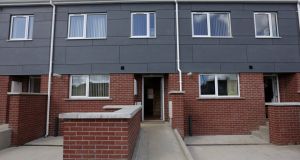 Rapid-build modular homes in Ballymun, Dublin. To date just 22 modular houses have been completed since the scheme was announced in 2015. Photograph: Laura Hutton/Collins Photo Agency

Modular homes, originally intended to provide short-term accommodation for homeless families living in hotels, are to be used as permanent housing for applicants on Dublin City Council’s housing waiting list.

The council in November announced plans to build modular or “stackable” apartments at two sites in the city. The 70 apartments are expected to cost €15 million.

The smaller of the two sites, a vacant plot on Fishamble Street near Christ Church Cathedral, will have four to eight apartments at a cost of €1.5 million to €1.8 million. This will be used to accommodate homeless families living in emergency accommodation.

However, the council has decided the second site, a €13.5 scheme of 62 apartments at Bunratty Road in Coolock, will be used to accommodate people on the council’s general housing waiting list. The list currently stands at some 20,000 applicants.

“Up to now we were using the modular or rapid-building housing for the homeless families,” deputy council chief executive Brendan Kenny said. “But these system-built apartments can be delivered in a shorter time-frame than traditional building methods – about half the time – and we would hope to use them more and more for general-needs housing.”

The “volumetric build” project involves stacking factory-built housing units to form apartment blocks. The council hopes to have both apartment schemes completed by 2018.

To date just 22 modular houses in Ballymun have been completed since the scheme was announced in 2015. The council has another 130 under construction at five more sites in the city, which are due for completion this summer.

The city council is the only Dublin local authority to have started building any modular homes. This is despite assurances from Minister for Housing Simon Coveney last November that more than 300 modular or “rapid-build” houses would be completed or under construction by the end of 2016.

Speaking on RTÉ radio’s Sean O’Rourke Show last week, Mr Coveney said he was categorising contracts being signed and “in place” as the modular housing being under way.

Yet by the end of the year none of the other three Dublin councils had entered into contracts with providers.

Last July Dublin City Council sent a questionnaire to the 23,446 applicants on its waiting list to assess their eligibility. Any applicant who did not respond was removed from the list. Some 3,500 were removed, but the council said any applicant who before March 31st proved they still qualified for social housing would have their applications re-examined and “reopened if appropriate”.