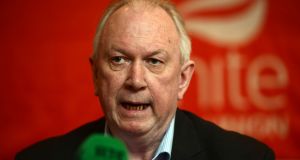 The leader of Unite in Ireland has insisted the trade union is not trying to block the use of its former headquarters on Merrion Square for social housing.

Jimmy Kelly was responding to reports the union – which was involved in the Home Sweet Home campaign that occupied Apollo House to use it to accommodate homeless people over Christmas – sought an exemption from providing social housing in the Dublin city centre building.

On December 7th last, property managers acting on behalf of Unite sought planning permission from Dublin City Council to convert the protected Georgian building on Merrion Square, which had been in office use, back to a single residence.

The application also proposed the construction to the rear of the house of a five-storey block featuring one two-bedroom and three three-bedroom apartments.

In tandem with the application, the union sought and was granted a “social housing exemption certificate”.

Under planning laws, developments of fewer than 10 homes are exempt from the requirement to provide social housing, but developers must formally apply to the council for the exemption.

“Planning permission was sought for apartments in order to maximise the value of the building and get the best value for the members’ money.”

He said it was his understanding that seeking the social housing exemption certificate was a necessary part of the process, but he needed to take further advice on the matter.

“If it is a question that we were doing something inappropriate in making the application for the social housing exemption, then we would withdraw that immediately. We are in no way trying to stop the building from having social housing.”

When asked why the building, which has been vacant for three years, had not been put to use for housing or a homeless hostel, Mr Kelly said the issue “never arose”.

He added: “We were getting on with what we were doing and not really thinking about Merrion Square .”

He said the Apollo House campaign was designed to highlight the potential use of empty Nama-controlled buildings. “The target with the campaign was Nama properties – it never looked at any other different category of building.”

Asked if he would now consider the Merrion Square building’s use for housing or a homeless hostel, he said that was a matter for the campaign as a whole. “If the campaign sits down tonight or next week and decides to move beyond Nama, then we will be part of that decision. If there is a decision to move in the direction of other properties, we would be happy with that.”

The deadline for submissions to the council on the planning application is Thursday.