A love letter from a Syrian to Ballaghaderreen

‘If somebody is needy and they were driven out of their homes . . . how could you say no?’

Councillor Michael Mulligan and former councillor, Michael Scully, have sympathy for Syrian refugees arriving in Ballaghaderreen, but ask if the town has the infrastructure to cope. Video: Keith Heneghan 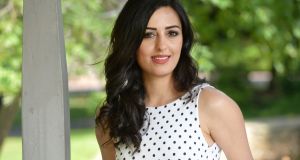 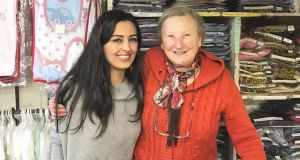 Razan Ibraheem and Mary Gallagher in Ballaghaderreen. Photograph from Facebook

Ballaghaderreen – population circa 2,000 – has been in the headlines now for more than a week since news that 80, mostly Syrian, refugees will be housed in a former hotel in the Co Roscommon town.

There has been a mixed reaction, with RTÉ’s Prime Time last week giving locals, including Mary Gallagher – who has run a clothes shop in Ballaghaderreen for more than 40 years – a chance to air their views.

“If somebody is needy and they were driven out of their homes and you see a child being picked up in Aleppo out of the clay, how could you say no?” she said, welcoming the newcomers. “You think of the people fleeing, drowning, all the different things that happened these refugees, and you have to sort of make the right decision.”

It prompted Syrian Razan Ibraheem, who has been living in Ireland for the past six years, to travel to the Co Roscommon town to meet Ms Gallagher. When she returned to Dublin, she wrote what she called, a “Syrian love letter to Ballaghaderreen”.

This letter is from a Syrian woman living and working in Ireland who had the honour and pleasure of visiting you today. Seeing your beautiful town and meeting your fantastic people have enlightened my life.

Syrian refugees will be very lucky to live among such a wonderful and accepting community.

I met so many lovely people including Mary Gallagher, the true soul and heart of Ireland.

I had the best pint of Guinness at the Fiddler Elbow pub and also the nicest cuppa in the Spell bar.

Everybody I met, as I wondered around the town in the afternoon of my visit, went out of their way to make me feel welcome.

By hosting Syrian refugees, you are not only saving and protecting them, you are truly creating new lives with new hope and dreams for the future.

You are a true Irish model, let’s tell the whole world about it.

Last year, in the series New to the Parish, Razan told of how hearing tales of death and destruction in her home country on a daily basis was unbearable.

“It’s like watching your child dying and you can’t do anything about it,” she said in The Irish Times article. “You feel paralysed. The culture, the heritage, the history, the humanity was being destroyed in front of my eyes and I felt helpless.

“I had saved for years to come here and study. I worked in Syria and in Kuwait as an English teacher to save the money. . . I thought the conflict was going to end after a few months. I never thought I would stay in Ireland. I thought, I’m going to finish my master’s and go back home, because I already had a job waiting for me.”

In 2011 she flew to Ireland to begin her studies at the University of Limerick. She now works in Dublin. “We have to hold on to the light. Syrians want to go home. They want to go back to their lives, to their businesses, their homes and their families. Everybody must take part in finding a solution.”