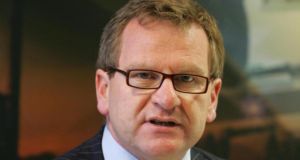 Ibec’s Danny McCoy: claimed the real value of the minimum wage had actually increased during the crisis. Photograph: Eric Luke.

Business groups and the restaurants sector have strongly opposed any increase in the minimum wage of €8.65 ahead of reports that the Low Pay Commission is expected to recommend a rise of 50 cent per hour.

The commission will present its report to Minister for Business and Employment Ged Nash over the next few days and is expected to recommend an increase of about 50 cent per hour.

Ibec, which represents Irish businesses, said the proposal was “at odds with all the economic evidence” and would “heap pressure on companies still struggling to stay in business and erode crucial competitiveness gains of recent years”.

Chief executive Danny McCoy said: “Given the economic evidence available, it is inexplicable how such a rise could be proposed. Prices across the economy are below where they were in 2008 and the real value of the minimum wage has actually increased during the crisis.”

Mr McCoy said many businesses still could not afford pay increases and turnover in sectors such as retail remained up to 20 per cent below the pre-crisis peak.

Chief executive of the Irish Small and Medium Enterprises Association (Isme), Mark Fielding, said the proposed increase of just under 6 per cent would be “devastating for many small businesses who are struggling to come out of recession”, Mr Fielding added

A minimum wage at the proposed level would “further distort competition by imposing a raised artificial floor for wages and trigger a knock-on effect, as higher paid employees use it as a benchmark from which to negotiate larger wage increases”.

The Restaurants Association of Ireland (RAI) said a 50 cent increase in the minimum wage would have a disproportionate negative impact on restaurants outside of the greater Dublin area and would lead to job losses.

“I have spoken to members across the country and they were in a state of disbelief that there was talk of increasing wages when restaurants are struggling to keep their doors open.”

The hotel and restaurant sector estimates that labour accounts for half of all its costs.

The Unite trade union expressed its disappointment at the reports that the commission will recommend an increase of just 50 cent.

In its submission to the commission, it had sought a €1 increase.

Ireland secretary, Jimmy Kelly, said the union’s research had consistently shown that Ireland was a low-wage economy compared with the EU 15.

“Ten per cent of Irish workers earn only just above the current minimum wage of €8.65. The 50 cent increase recommended by the Low Pay Commission will only bring the Minimum Wage to €9.15 – well below the 2015 living wage of €11.50 recently calculated by the Living Wage Technical Group,” Mr Kelly said.

Tánaiste Joan Burton told the conference of the Irish Congress of Trade Unions in Ennis earlier this month she hoped and expected that the national minimum wage rate would be increased.

The previous Fianna Fáil-Green Party administration reduced the national minimum wage by €1. The Government restored the rate to €8.65 shortly after it came to power.

Mr Nash is expected to bring the report of the commission to Cabinet next week.