Mickey Harte: voters must chose between ‘culture of death and culture of life’ 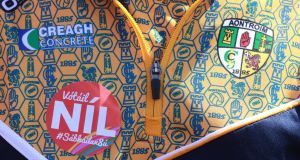 Members of the GAA Athletes for a NO Vote group held an event in Ballyfermot Sports and Fitness Centre on Saturday. Photograph Nick Bradshaw

Tyrone GAA manager Mickey Harte has said people will have to choose between voting for a “culture of death or a culture of life" in the abortion referendum.

A group of GAA figures launched the GAA Athletes for a No Vote campaign in Dublin on Saturday. Gaelic Athletes for Life said the Government’s proposals on abortion are not inclusive and “seek to exclude one group of people - the unborn - from society”.

The group said its members “respect and cherish women. We support them, and we believe that as a society we have much more, so much more to offer women than the death of our children”.

The GAA as an organisation said it will remain neutral on the issue of the Eighth Amendment.

The Eighth Amendment was inserted into the Constitution after a referendum in 1983. The amendment guarantees to protect as far as practicable the equal right to life of the unborn and the mother. It prohibits abortion in almost all cases. Voters go to the polls on May 25th to decide whether or not to remove the provision from the Constitution and introduce legislation allowing for abortion in certain circumstances and without restriction in the first 12 weeks of pregnancy.

In the latest Irish Times/Ipsos MRBI opinion poll, 47 per cent of voters said they would vote Yes to repealing the provision in the Constitution, while 28 per cent said they would vote No. When asked about the poll, Mr Harte said the No side would continue to convince voters to vote No in the coming weeks.

“It’s not a question being confident about whether Yes or No will pass. It’s a question of stating what you believe and to me it’s a straight vote between a culture of death and a culture of life. As long as there’s time to try and present the picture that a culture of life is always a more positive place to be, then we have to keep working at that until the day of the vote,” he said.

Mr Harte said although there is abortion available in limited circumstances in Ireland, he does not want to see it allowed “on demand.”

“That abortion is going on regardless is not a real valuable sort of argument to say that we should bring it in on demand in Ireland,”he said.

“We will be doing anything we can in the coming weeks to help people understand exactly what they’re voting for. They’re going to be voting for a culture of death or a culture of life. The pro-life movement wants to look after the mother and the baby. The opposition doesn’t have any concern for the unborn baby,” he said.