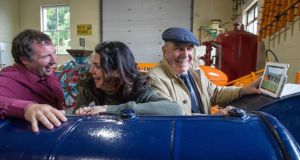 The bond between men and their sheds is well-known but they usually work alone when they disappear into sheds. Now a growing movement is encouraging men with time on their hands to join the community of “Men’s Sheds” to work on a range of projects while enjoying the friendship of other men.

Hans Meyer got involved with Mulhuddart Men’s Shed in Dublin after he was made redundant from his job at Dublin Airport in 2011.

“I found a leaflet about the Men’s Shed so I popped in and I’ve been here since. It was only me and my wife at home in the house so I got bored and wanted something to do,” he says.

More than 7,000 men are members of almost 220 Men’s Sheds on the island of Ireland. Every shed is different. Some 16 men, aged 40 to 68 are involved in the Mulhuddart Men’s Shed and they spend most of their time on woodwork projects.

“90 per cent of what we do here involves woodwork,” Mr Meyer says. “We make birdhouses, benches, flower boxes, tables, all from scrap material. We also repair bikes. We recently got a donation of 60 bikes from the garda station in Blanchardstown so we are repairing them and selling them.”

He says his brain is occupied all the time now. “The main thing is to get out of the house. You know, we men are not very open but when we’re together we talk more. There are no social workers here, or nurses, but we chat and that’s very important.”

He remembers one of its oldest members telling him that he was on a range of tablets before he started visiting the Men’s Shed.

“Now he says: “I only take Solpadeine from time to time. I don’t need the other tablets anymore”.”

This is echoed by Gerard Grehan who says Mulhuddart Men’s Shed has changed his life. He got depressed after a series of injuries and accidents forced him to give up his work as a butcher seven years ago.

“I was on anti-depressants and I couldn’t work,” he recalls. “Then I came down six months ago and I haven’t looked back since. My mental health has gone from zero to 100.

“ The friendships here are fantastic, second to none,” he says. “A lot of men here don’t drink , or don’t have the money to go to the pub, so this is like our pub.”

Over in Moynalty, Co Meath, members are busy restoring old farm machinery while the Drogheda “shedders” are designing and manufacturing awards for ceremonies. Their hashtag prototype was selected as the winning design for the Digital Times’ Tweetie awards.

John Evoy, chief executive of the Irish Men’s Sheds Association says the potential for the movement is huge.

“We reckon the numbers could double. There are nearly 2,000 GAA clubs and 500 ICA groups so there’s room to continue to expand. Our motto is that men don’t talk face to face - they talk shoulder to shoulder.”