Luas drivers say they have not been adequately trained 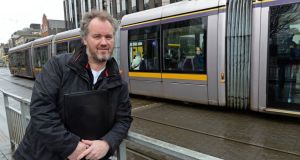 Dublin Luas drivers say they have not been adequately trained to drive the new Cross City lines, due to begin operating on Saturday.

A number of driver health and safety representatives, members of Siptu, have told The Irish Times drivers were due to have 17 hours’ training on the line from St Stephen’s Green to Broombridge, but received just six. They say the new line is far more complex, with more hazards and busy junctions than the green and red lines and warn of the possibility of accidents in coming weeks as drivers get used to it.

Despite assurances by Luas operator Transdev that all drivers were ready to operate the line, one health and safety rep said: “The reality is that the majority of drivers are not ready because they have only received six hours’ live driving experience on the new route.

“This in my opinion is totally insufficient and poses a risk to public safety. Two-thirds of the 200 drivers have not driven a tram at night as their training was designed to suit trainers in daylight hours only.”

Richie McCarthy, Siptu shop steward, said about 50 of the 200 drivers had voiced “serious concerns” about their confidence to operate the new lines.

“A lot of drivers asked for additional training but were told by management they had been passed competent to drive the lines. Of course they are competent. They’ve been driving the trams for 10 years. But there’s a difference between competence and adequate training.”

While some of the drivers insisted they got additional training, others “felt under pressure to sign off and say they were fit”.

“I would be concerned the drivers are not fully au fait with the complexities of the Cross City line. There are a lot of hazards on the new line.”

Asked about the timing of the commencement of the services, he said: “Well the 9th of December was the date set and it seems everything was squashed to meet that. I think there was pressure from city centre businesses to get the line open for Christmas. It should have been deferred to the new year.”

Drivers’ concerns have been brought to the Health and Safety Authority. A spokesman confirmed the authority was “engaging with Transdev on the issue of driver training”.

Solidarity TD Mick Barry, a member of the Oireachtas transport committee, is calling for both Transdev and Siptu to appear to discuss drivers’ concerns.

“Health and safety is paramount and from what I understand Transdev has fallen short and has some serious questions to answer,” said the deputy.

A spokeswoman for Transdev said any driver that requested more training would get it. She said each had received a minimum of 17 hours’ training on the new line, though did not specify how many of these hours were in simulators and how many on the actual lines.

“On launch day, December 9th, we will have completed close to 2,000 return trips on the line. A small number of drivers asked for extra training and training and support is being facilitated for all who asked,” she said.

Teams of people were “hard at work counting down to the launch” at 2pm on Saturday.

“It represents a milestone for the Luas network and for transport in Dublin.”