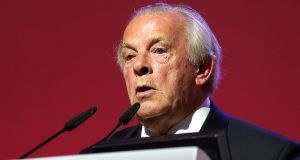 Professional Footballers’ Association chief executive Gordon Taylor has raised the possibility that halves may be shorter than 45 minutes as discussions continue about the Premier League’s return. Photograph: PA

Shorter matches are being considered as part of plans to restart the football season, according to the chief executive of the Professional Footballers’ Association, Gordon Taylor.

Games have been suspended since March and, safety permitting, the aim is resume the English season in June. Fifa has proposed allowing extra substitutions to help players cope with greater fixture congestion after a break without training or competition, and Taylor said games of less than 45 minutes each way were also under consideration.

“We don’t know the future,” Taylor told BBC Radio 4’s Today programme. “What we do know is what propositions have been put, what ideas have been put: the possibility of having more substitutes, games possibly not being the full 45 minutes each way, there’s talk of neutral stadiums – there’s lots of things being put forward. Try to wait and see what the proposals are and then have the courtesy to let the managers and coaches and players also assimilate all those and come to a considered view.”

Taylor said a protocol for football’s return, drawn up in conjunction with medical experts and the UK government, was due to be put to players and coaches as early as possible next week and would be looked at club by club. He indicated that players would be allowed to decide whether they wanted to play.

“Of course they are concerned about their own safety – they are not stupid – and neither are they naive, so they would have to be satisfied that it is safe to return and it is their choice,” Taylor said.

Manchester City’s Sergio Agüero has said he and the majority of players are scared about playing amid Covid-19. “Sergio is a top-class player and is entitled to his opinion, of course,” Taylor said. “It’s not a question of being scared, it’s a question of being fully informed and for the relevant authorities to try to make sure it’s as safe as it possibly can be to return.”

He added: “The very fact that you are in professional sport you need to be very resilient and you need to be able to bounce back because you will get more setbacks than you will good times. I would like to think that’s how my members are, so it remains in process and we shall just have to wait and see and look at it on a day-by-day basis and see if it’s achievable.”