US delegation to visit Belfast with peace process on agenda 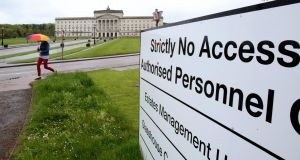 Stormont: Members of the Helsinki Commission will visit it in the course of a three-day trip to Belfast. Photograph: Paul Faith/AFP

A delegation from the United States congress is due to travel to Belfast next weekend, amid renewed interest in Washington in the Northern Ireland peace process.

Members of the Helsinki Commission – a US government body dedicated to human rights – is scheduled to visit Belfast next Friday for a three-day trip.

Up to a dozen members of congress – from both the House of Representatives and the US senate – will take part in the congressional visit.

A number of engagements are scheduled, including a meeting with Belfast Lord Mayor John Finucane, a visit to Stormont and to peace walls in the city, as well as meetings with cross-community groups.

The Helsinki Commission was established in the wake of the Helsinki accords, a set of international principles on security, co-operation and human rights in Europe agreed in the mid-1970s. It was a forerunner to the OSCE (Organisation for Security and Co-operation in Europe), the Vienna-based body with 57 members, including Ireland.

While the US government agency has long taken an active interest in Northern Ireland, a visit by members of the commission is a new departure. It is more than two decades since a co-delegation visited the region.

In addition to a focus on the current political situation in Northern Ireland, including the absence of a functioning executive and the implications of Brexit for the Border, it is expected the visit will also address contemporary social issues such as the ban on same-sex marriage and abortion provision.

As well as addressing human rights issues such as conflict resolution, citizenship and political rights, the commission also ensures the upholding of gender rights, tolerance and religious freedom across the world.

The Helsinki Commission has in the past held several hearings in the US congress on Northern Ireland, including on police reform and the Patten report, the Stormont House agreement, and the murder of Belfast solicitor John Finucane.

Last year, a special hearing of the commission in Washington heard that Britain’s departure from the European Union could unravel the Belfast Agreement and have a profound effect on the legal and constitutional underpinning of the present jurisdiction of Northern Ireland.

Norman Houston OBE, the director of the Northern Ireland bureau in Washington DC which represents Northern Irish interests in the US capital, welcomed the announcement of the visit.

“We continue to be very grateful for the United States’ continuing interest in Northern Ireland. Delegations from the United State are always extremely welcome to Belfast, and any opportunity to develop the Northern Irish economy as well as securing peace for future generations is something we support,” he said.

The visit by members of the commission is the latest indication of increasing interest on Capitol Hill in Northern Ireland, more than 20 years after Washington played a central role in the peace process.

Last week, an amendment to double US contributions to the International Fund for Ireland was passed by the House of Representatives, and will now be considered in the senate. The fund was established in 1986 to promote economic advancement in Northern Ireland and to encourage dialogue between nationalist and unionist communities. It has been a central strand of America’s engagement with Northern Ireland for three decades.

Since its inception more than 30 years ago, in excess of €912 million has been provided to the fund, supporting more than 6,000 projects across the island of Ireland.