Lives in Limbo: ‘It affects you as a parent and a man’

The direct provision system for asylum seekers has a high human and social cost, and adapting to normal life afterwards is a slow process

Heidar has recently gained refugee status and has left the direct provision system. He speaks about the difficulties he has faced since moving into the wider community with his wife and children. irishtimes.com/livesinlimbo Video: Bryan O'Brien 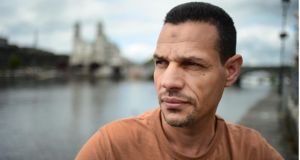 Heidar from Iraq who has left the direct provision system and now lives with his wife and three children in rented accommodation in Athlone. Photograph: Bryan O’Brien

After five long years in the direct provision system spent waiting, hoping and praying, Heidar finally got the news he had dreamt of. His asylum application was successful. He wouldn’t have to return to the chaos and uncertainty of Baghdad with his young family. His wife wept with relief.

“For so long we were living with so many questions,” says Heidar, who worked as a shopkeeper before seeking asylum in Ireland. “What would happen to us? Why is this taking so long? How would we manage? The future was unknown. Life was blocked. It caused me and my wife much stress and upset.”

For Heidar, however, the official letter confirming his status was met with relief rather than joy. It was, he thinks, because he was a changed man. He came to Ireland as a proud shopowner with a strong work ethic; a provider for his family; a role model for his children.

Instead, he was forced to sit on his hands in a system where work is forbidden and where time feels stuck on a never-ending loop.

He ended up doing a blur of vocational courses – community development, caring, photography – and volunteering; anything to keep busy.

But there’s no escaping the gnawing sense of inadequacy. Over time he could feel his self-confidence drain away.

“It affects you as a parent and a man,” he says. “Fives years of not being able to provide for your children or meet other family needs. Coming from the Middle East, in my culture a man works. He doesn’t sit at home.”

So, even as he secured his status, he felt consumed with doubt: how would he survive? Where would they live? How would they make ends meet? Would he be able to find a job?

The Government has defended the direct provision system on the basis it is the most humane and cost-effective way to meet the needs of asylum seekers.

But campaign groups say they have documented how often highly qualified asylum seekers who secure refugee status have ended up deskilled and demotivated after years spent in the system.

Even though refugees typically have a high standard of education, their unemployment rates are several times higher than the general population. “It is difficult to understand why the authorities maintain this system when the evidence of the human, financial and social cost is clear,” says Sue Conlan of the Irish Refugee Council.

Ireland is one of just two EU countries that doesn’t allow asylum seekers work no matter how long their application takes to process. The average length of stay in the direct provision system is three years and eight months. While government ministers have acknowledged this is too long, the prohibition on work has been defended on the basis that any relaxation would be an additional “pull” factor for more applicants.

Various groups have offered alternative asylum models based partially on how other jurisdictions run their systems (see panel). The Irish Refugee Council says, for example, reforms could save the taxpayer €9 million a year by moving asylum seekers into private rented accommodation after six months. The system would also be means tested to ensure only those entitles to support receive it.

Finding a place to live was the first challenge for Heidar. But how do you do find somewhere when you have no money for a deposit, and your landlord wants a reference from the previous place you stayed?

Heidar asked the owners of the direct provision centre for a reference. They refused. Similar letters had been abused by other asylum seekers in the past, they said. It meant it took two months to find a place that was willing to take him and his family.

Then there was the problem of finding work. But how do you find a job when you have no employer’s reference and no evidence of work over the previous five years? “It reflects badly on you,” he says. “People think you are lazy, even though you are not allowed to work under the system. They don’t realise.”

He sent CVs that went unanswered, and tried shops and other potential employers with little success.

In the end, he applied to study for a third-level diploma in community development. It was, he figured, the best way of finding a job. “I’d like to be able to help other people, especially migrants who are living here. Many of them need a lot of support.”

It’s a course he might have completed during the five years he spend in the direct provision system . But asylum seekers are barred from access to third level. But he feels happy that he’s on a pathway to work.

“In comparison to other people in my situation, I am quite optimistic,” he says.

“The asylum system is broken,” one barrister told The Irish Times earlier this year. “The legislation and the way decisions are made – they’re both broken.”

Under current legislation, asylum applications in Ireland are dealt with in a lengthy and fragmented manner.

Asylum seekers apply for different types of protection – such as refugee status or subsidiary protection – one after the other. This stretches the process out over many years. Applicants are also entitled under law to seek a judicial review of decisions made by authorities.

There are about 1,300 cases awaiting judicial review decisions. Even if applications stopped tomorrow, it’s estimated it could take in the region of 4½ years to clear the backlog due to delays in the system.

Some argue that asylum seekers are taking legal challenges just to prolong their stay in the State. But others counter that anyone seeking refugee status will go down a legal route when the system itself has one of the highest rejection rates for asylum applicants across the EU.

Last year, for example, just over a third – 34 per cent – of all initial applications for asylum across the EU were accepted. In Ireland, this figure was 18 per cent.

Similarly, acceptance rates for applications on appeal across the EU were 18 per cent last year. In Ireland, they were 9 per cent.

The main beneficiaries of this broken system, meanwhile, appear to be lawyers. Barristers specialising in asylum are consistently among the highest earners, with some being paid close to €500,000 a year to represent the State in court cases.

Successive governments have pledged – but failed – to introduce a single procedure, where all applications could be processed together.

Frances Fitzgerald, the Minister for Justice, is the latest to pledge to introduce a new streamlined system which would dramatically cut down the processing times for asylum cases.

“Such reform would substantially simplify and streamline the existing arrangements . . . and provide applicants with a final decision on their application in a more straightforward and timely fashion,” she says. She is reviewing work done on draft legislation in this area, she says, and will then decide on how best to expedite the new system.

Five years after they arrived here from Iraq, Heidar and his young family are building a new life for themselves.

Gone is the cramped and dusty mobile home that was their living space for so long. Gone is the security barrier, where they had to sign visitors in and out. And gone, too, is the sense of isolation from the wider community.

“All these things impacted on children,” he says. “They take in everything.”

Heidar and this young family now rent a three bedroom semi-detached house in a small housing estate on the edge of Athlone.

He carries prayer beads with him everywhere he goes, to give thanks for the situation his family find themselves in.

“The biggest difference?” he says. “Dignity and freedom. I feel respected. We have choices. We can choose our own food, go out with the kids when we like. They can have friends over. They can play in the back garden. They are less complaining. There is space. Everything, now, is different.”