Oireachtas committee has opened the door to abortion for disability 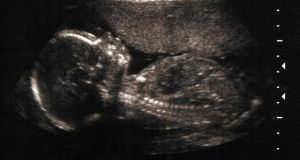 An ultrasound image of a five-month-old foetus. The majority of the Joint Oireachtas Committee on the Eighth Amendment proposed to allow abortion in the first 12 weeks of pregnancy “with no restriction as to reason”.

The report of the Joint Oireachtas Committee on the Eighth Amendment of the Constitution is a dismal document. It proposes the introduction of abortion on demand, expressly for the first twelve weeks of the child’s life, and covertly at all stages potentially up to birth.

The majority of the committee proposes the abortion of unborn children in the first 12 weeks of their lives “with no restriction as to reason”. The ostensible inspiration for this proposal is the unworkability of grounds for abortions based on rape, but the breadth of the committee’s proposal has no limits. Abortion for disability clearly falls within its scope. If no reasons need be given, any reason will do.

Abortion for disability can also feature, again not expressly, under the name of “mental health”. Such a ground has tended internationally to be very broad in practice. The committee notes that in a number of European countries the health ground “does not have a gestational limit” (or, put another way, permits abortion up to birth). The committee, far from recoiling at such a law, embraces it. It considers that “medical practitioners, acting in good faith, and in consultation with the woman, are best placed to make such a decision” and it proposes no time limits.

The only qualification it envisages is that statutory requirements “should underpin guidelines drawn up by the Minister for Health in consultation with the Medical Council and the Nursing and Midwifery Board of Ireland”. There is no indication here that the committee has any objection in principle to abortion up to birth.

The good-faith requirement is not a meaningful restriction in practice. In the words of British law lord Leslie Scarman an opinion authorising abortion “may be absurd professionally and yet formed in good faith”.

The committee’s report expressed no concern with the practice of foeticide of unborn children close to the time of birth, described in frank detail by Peter Thompson, a British consultant in foetal medicine, in his testimony to the committee on November 29th. Deputy Kate O’Connell had asked: “Who is benefitting here: the mother; the doctor; the child? What is the holistic approach to early delivery or late termination, or whatever it is that we want to call it? I ask Dr Thompson to expand on this because there has been much conversation about it being a very barbaric act, though I am sure that Dr Thompson might disagree with that.”

Thompson explained: “Foeticide is performed when one is terminating a pregnancy after 22 weeks of gestation. We tend to do this under ultrasound control and gain access to the foetal circulation, sometimes through the heart. It is important that one then paralyses the foetus by administering a drug much as one would with a general anaesthetic, followed by an injection of either a local anaesthetic or potassium, which stops the heart.

“Once the foetus is born it becomes a baby and it is important to realise that whereas the foetus has no rights in the United Kingdom, the second it is born it acquires full rights. In the UK, then, one might end up with the scenario in which a woman undergoes a termination of pregnancy without the performing of foeticide only for the baby to be resuscitated afterwards. One would then have turned a scenario involving a foetus with an abnormality into one involving a premature baby with an abnormality, thus making the whole situation worse.”

Thompson in his opening statement referred to the report of a working party of the Royal College of Obstetricians and Gynaecologists, Termination for Fetal Abnormality in England, Scotland and Wales, published in May 2010. The working party noted that, “[W]hen undertaking a termination of pregnancy, the intention is that the fetus should not survive and that the process of abortion should achieve this.” It described the live birth of a child following attempted foeticide as a “failure”.

Under our present law, doctors strive earnestly to protect both the mother and her unborn child. No necessary treatment will be denied the mother, even where this may result in the unsought death of the child. The abortion philosophy embraced by the Oireachtas committee is quite different. Its proposals envisage the intentional destruction of the unborn child’s life.

Is this the kind of society we want Ireland to turn into? In 2001, in an act of profound human solidarity, we amended our Constitution to ensure that the State would not condone the taking of the lives of those convicted of serious wrongs. Is it to be contemplated that in 2018 we shall amend our Constitution to authorise the intentional taking of the lives of defenceless, innocent human beings?

William Binchy is a barrister and adjunct professor of law at Trinity College Dublin. He is also primary legal adviser to the Pro Life Campaign