Landlord in RTÉ exposé has record of overcrowded housing

The rental sector in Ireland has been exposed in the RTE Investigates programme, Prime Time: Nightmare to Let. Video: RTE 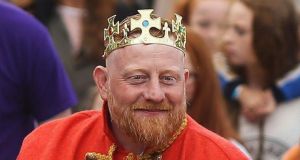 Andrew O’Neill: the man behind the Old County Road accommodation where 64 people were living, was crowned ‘King of the Gingers’ last year. Photograph: Brian Lawless/PA

One of the landlords featured in the RTÉ Investigates exposé on overcrowded, unsafe and unsanitary lettings has a track record of cramming people into accommodation and raking in thousands of euro a month.

Another works part-time in boxing as ringside support and assisted in the recent fight in Las Vegas that preceded Conor McGregor’s bout with Floyd Mayweather.

A third ran a cannabis farm from the attic of his former home in south Dublin while simultaneously operating a rickshaw business in Dublin.

In the RTÉ programme, Christian Carter – who has an address at Longford Terrace in Monkstown – was identified as the man behind a house at Charleville Road in Rathmines into which 23 women were living. The property has just one shower and two toilets and occupants had to have lights out at 10pm.

Prior to this, Carter was revealed to be one of two men behind what was The Pines, at Lehaunstown in Cabinteely, Co Dublin, in which up to 70 people lived. Originally a five-bedroom house, it had been subdivided into 15 bedrooms.

The Circuit Civil Court heard that Carter was generating up to €16,000 a month from the property, which was occupied by tenants mainly from South America and eastern Europe. Carter was paying the owner, Richard Stanley, rent of €2,000 a month cash and €2,000 by banker’s order.

Last February, Carter and Stanley were held liable for an estimated €60,000 legal costs due to Dún Laoghaire-Rathdown Council, which had sought injunctions restraining the continued use of the house as a multi-occupancy dormitory property. The costs are with a legal cost accountant the the council continues to press payment.

Carter was also involved in multiple occupancy properties in Clontarf and Rathmines, each estimated to be yielding rental income of some €12,000 a month.

When asked about the properties in February 2017 after enforcement proceedings were taken by Dublin City Council, Carter shrugged off overcrowding by saying that tenants “could move out if they wanted to”.

The boxing ringside support worker is Andrew O’Neill, exposed by RTÉ Investigates as the man behind the Old County Road accommodation in Crumlin where 64 people were living and whose fire door emergency exit was blocked.

O’Neill, who is originally from Crumlin but how lives in Kilkenny, was seen on the programme avoiding reporter Barry O’Kelly behind the gated entrance to his home.

O’Neill is well-known in the boxing circles. He works as a “cut man” – the member of the fighter’s ringside support team who wipes clean the boxer’s cuts and tries to seal the wound with petroleum jelly.

O’Neill was cut man and chief support during the fight that preceded the Conor McGregor-Floyd Mayweather bout in Las Vegas in August, the fight known as the undercard to the main event.

He worked in the corner of Costa Rican boxer Francisco Fonseca, who challenged Gervonta Davis for his super featherweight title. In the event, Davis, a Mayweather Promotions fighter, beat the Costa Rican to retain his title.

Known for his distinctive beard and red hair, O’Neill was crowned ‘King of the Gingers’ at an event last year.

RTÉ Investigates identified two people behind what was alleged to be temporary student accommodation on Old Kilmainham Road in Dublin. They were Jason Orr and Joshua Cantwell who are linked to a company, The Green Effect Technologies Ltd, that trades as Global Academics.

Orr, who has an address at Park Avenue, Glenageary Heights, was convicted in April 2012 of running a cannabis factory in the attic of his former home, which was on Rochestown Avenue in Deansgrange. Gardaí found 39 plants in various stages of growth.

At the time, Orr was running a rickshaw business and in February 2014, he pleaded guilty at the Circuit Criminal Court. With no previous convictions and having donated €1,000 to charity, Orr was given a 3½-year suspended sentence.

At 4.50pm on Wednesday, Orr and Cantewll made a last-minute attempt to halt the programme by telling RTÉ they would seek a permanent injunction from the High Court the following day, the day of the broadcast, hoping to prevent it going out on air.

But in court on Thursday morning, RTÉ was able to show how the two men had been aware of the investigation since early October.

Furthermore, the two were under investigation by Dublin City Council since at least August 2017 and there was no evidence they were co-operating with the council.

In an affidavit, Orr claimed there was “absolutely no prospect of a prosecution taking place” against him and Cantwell over the Kilmainham property and that if broadcast, RTÉ would prejudice any other investigation.

RTÉ was trying them both “and has arrived at a conclusive finding of guilt”, said Orr.

RTÉ responded that Barry O’Kelly had been investigating sub-standard accommodation since April 2017, and that Orr and Cantwell has been offered a pre-broadcast right of reply to which they had not responded. They had “failed to engage in any meaningful way” with O’Kelly, the broadcaster said.

“The plaintiffs are contending that a broadcaster, journalist or newspaper can be precluded from reporting on, or investigating, a matter which happens to be under investigation by a State agency,” lawyers for RTÉ claimed. “If correct, this would prevent any reporting on matters which were the subject of tribunals of inquiry of Dáil Committees.”

On reading RTÉ’s rebuttal, Orr and Cantwell withdrew their application for an injunction and the programme aired as scheduled on Thursday night.

Efforts to contact Carter, O’Neill, Orr and Cantwell on Friday were unsuccessful.