Many victims feel they will not be taken seriously, according to Stad report 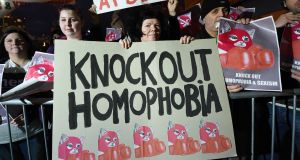 LGBT supporters protest at the BBC Sports Personality of the Year awards in Belfast in 2015. File photograph: Charles McQuillan/Getty Images

Only one in 10 transgender victims of hate crime report the incident to the Garda, according to a new study.

The study details 62 anti-transgender hate crimes [57 in the Republic and five in Northern Ireland] which were reported to Stop Transphobia and Discrimination (Stad) between 2014 and 2016.

It shows victims of transphobic hate crime in the Republic are face less likely to make an official report compared with those in Northern Ireland.

The Stad Report 2014-2016 was conducted on behalf of the Transgender Equality Network Ireland (Teni) by the University of Limerick’s Hate and Hostility Research Group.

“Despite recent advances in transgender rights, including the ground-breaking Gender Recognition Act 2015, many members of our community continue to encounter levels of prejudice and discrimination in their daily lives that undoubtedly constitute hate crime,” chair of Teni Sara Phillips said.

“It is also worrying that among those identified in the report only one in 10 chose to report such incidents to gardaí.”

Ireland does not have any laws specifically dealing with hate crimes such as assault or harassment. Hate speech can be prosecuted under the Incitement to Hatred Act 1989 but there have only been five such prosecutions in the last 28 years.

Teni chief executive Stephen O’Hare said: “It is widely accepted that Ireland lacks an adequate legal framework to combat this sort of crime. Despite recent observations from respected national and international human rights monitoring bodies on the need to introduce measures which are effective, proportionate and dissuasive, progress has been slow. This leaves many trans and gender-variant victims of transphobic hate crime with no obvious legal remedy.”

Of the 57 anti-transgender crimes in the Republic of Ireland logged to Stad, only six were reported to the Garda. In contrast, three-quarters of those logging hate crimes in Northern Ireland reported them to the PSNI.

The most common reasons given by victims for not reporting incidents to gardaí were the belief they would not be taken seriously or that gardaí would not or could not do anything.

“As I closed the door, I heard one of the men shout the word “F****t!” . . . a few moments later, the sound of an attempted kicking-in of the locked door of the cubicle I was occupying, which was quickly followed by the sound of two laughing Neanderthals as they fled the scene,” one person reported.

Another person reported an attack by two people with knives: “The others were cheering them on . . . They made swipes at me with the knives but missed me on purpose . . . I ran home and they followed me half way and stopped when they saw me put a key in the door”.