‘I just felt really, really fed up and irritated that we were still having this conversation’ 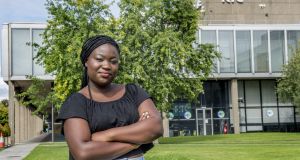 RTÉ has said social media companies need to tackle online behaviour after one of its presenters was subjected to “vile” racist abuse.

Zainab Boladale (23), who presented the News2Day programme from 2017 to 2019 and now works on Nationwide, said she was called a n****r and compared to a monkey.

She was targeted via content posted on YouTube which has since been removed, however the debate about racism in Ireland moved her to speak out.

“I just felt really, really fed up and irritated that we were still having this conversation, because I felt like we’re constantly having the conversation about what is racist and what isn’t. It’s very clear what is and what isn’t,” she said.

Ms Boladale, a fluent Irish speaker, was born in Nigeria but grew up in Co Clare from the age of four. She is a Dublin City University graduate and has worked at RTÉ since 2017.

In an interview on the News at One programme, she explained how in March 2018 someone sent her screen shots of YouTube videos of her on television which had abusive commentary attached.

She reported it and although it was taken down it later reappeared. Up until last October there were about six videos of her online criticising her and using abusive terms.

“They would write big long speeches about how I don’t belong here,” she said.

A lot of people reported the account which also featured others and again YouTube took it down.

Responding to the interview, Jon Williams, managing director of RTÉ News and Current Affairs said staff were disgusted by the “vile behaviour” experienced by the reporter.

“Zainab’s grace and dignity stands in sharp contrast to the cowardice of the bullies who’ve abused her,” he said.

“Sadly harassment of journalists is nothing new. But we expect the social media companies to act quickly and decisively to protect victims. All of her RTÉ family stand with Zainab and abhor any kind of racism.”

Ms Boladale said her experience was not simply a virtual one - she has also had disturbing encounters in day-to-day life including a run in with a man in the midlands who questioned her about where she was from. Ms Boladale said the experience had “put a downer” on her day.

“You feel helpless. You feel like you just have to accept it, that’s just an accepted reality of being from a minority background in Ireland. It feels kind of like, why bother even complaining when it’s going to happen again.”

Ex-lovers in dispute over alleged movement of horses worth up to €4.5m