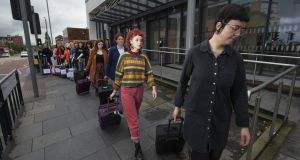 Pro-choice supporters in Belfast stage a demonstration to highlight the 21 women a week on average who are forced to travel for an abortion. Photograph: Charles McQuillan/Getty

Doctors in Northern Ireland must be given clarification about the rules now governing abortion laws following the decriminalisation of abortion this week, professional bodies representing GPs and midwives have warned.

GPs continue “to face uncertainty about where they stand legally”, warned Dr Gráinne Doran, the chairwoman of the Royal College of General Practitioners Northern Ireland.

Prosecutions can no longer be brought against qualified healthcare professionals or others who provide or assist in the abortion. Equally, however, no regulations exist to govern any such offered assistance.

The sale and supply of abortion pills bought online remains unlawful without a prescription, but women requiring medical help after using them will not be prosecuted if they seek assistance in Northern Ireland.

A public consultation will begin shortly, due for completion by the end of March. Up to then, women in Northern Ireland will be able to get abortions in England free of charge, while medics in the North will be able to supply information about English services.

Doctors with a conscientious objection to abortion should direct women to where the information is available, the Northern Ireland Office said in guidance issued to healthcare professionals earlier this month.

“Given the urgent timescales we are working to, and in the absence of a legal abortion framework in which services could operate, there are no plans for additional services to be routinely available in Northern Ireland before March 31st, 2020,” the guidance stated.

Abortions may be carried out up to March in cases of extreme medical need, such as fatal foetal abnormality. In 2017-2018, 12 such abortions were carried out. Each Northern Irish health trust will decide on a case-by-case basis, said Dr Laura McLaughlin of the Royal College of Obstetricians and Gynaecologists.

Abortion services have not been deregulated and abortions up to 28 weeks will not be allowed, said Dr McLaughlin, who added that charges to the contrary by anti-abortion campaigners were “absolutely not the case”.

“Women will now be treated as patients, not as criminals,” she said. “That’s the big change.” Medicine is highly regulated. As well as state rules, health professionals must abide by professional codes of conduct.

The Northern Ireland Office guidance has offered some clarification, said Dr Gráinne Doran, but her organisation is “disappointed” that a dedicated helpline for doctors and updated FAQs have not been provided.

Ireland’s main Christian churches in Ireland have deplored the outcome of Monday’s gathering of the Stormont Assembly, which was called by the Democratic Unionist Party, which wanted to block decriminalisation.

Both Catholic bishops and the moderator of the Presbyterian Church in Ireland, Dr William Henry, criticised politicians, such as the SDLP’s Colum Eastwood, who described the attempt to block the legislation as a “stunt”.

In a statement the Catholic bishops of Northern Ireland said the Westminster legislation had removed “all explicit protection for the unborn child up to 28 weeks of pregnancy”, creating “potentially one of the most liberal and unregulated abortion regimes in the world”.

“This is a tragic day for the unborn children who will now never bless our world with their unique and precious lives. It is also a sad day for our local democracy,” they said.

“The unavoidable truth is that our locally elected representatives had the time and the power to prevent this draconian Westminster abortion legislation being introduced over the heads of local citizens but chose not to do so.

“It is the duty of citizens to hold their elected representatives accountable for the decisions they have made,” said the bishops, who particularly criticised Sinn Féin, Alliance, the SDLP and the Greens.